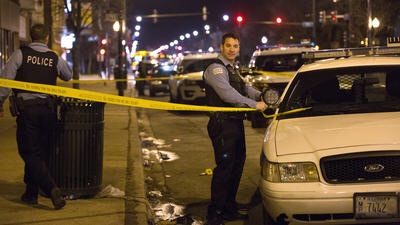 16-year-old boy was shot and killed by Chicago police Monday evening after he got into an “armed confrontation” with an officer who had stopped a car believed connected to an earlier shooting on the West Side, authorities said.

Officers pulled the car over around 7:40 p.m. in the 3400 block of West Grenshaw Street in the Homan Square neighborhood, according to Chicago Police Chief of Detectives Eugene Roy.  The teen jumped out and ran away, and an officer followed, he said.

“(Officers) attempted to stop the car, at which time the offender fled from the car, with one officer in pursuit,” Roy said on the scene shortly before 10 p.m. “A foot pursuit ensued, during the course of that pursuit, it led to an armed confrontation between the offender and the officer, resulting in the officer firing shots with his service weapon, striking the offender.”

The boy, Pierre L. Loury, was taken to Mount Sinai Hospital and pronounced dead at 8:27 p.m., according to the medical examiner’s office. He lived in the 3600 block of West Grenshaw Avenue, not far from the shooting scene.

No officers were injured, Roy said

A weapon was found on scene and was taken into evidence, he said. An alley between Roosevelt Road and Grenshaw was blocked with red evidence tape, and an evidence marker on Roosevelt showed where a gun magazine lay on the ground.

Police referred further questions to the Independent Police Review Authority, which was notified of the shooting around 8 p.m., according to Larry Merritt, a spokesman for the board. IPRA generally does not answer questions about police shootings while it conducts investigations.

A statement from Police News Affairs said the officer involved “will be placed on routine administrative duties for a period of 30 days,” a procedure initiated last year for all police-involved shootings.

Rape Matters … Be Informed … Speak Up and Speak Out By: Tikia Travis | @___tkia
Leek Loki’s Interview