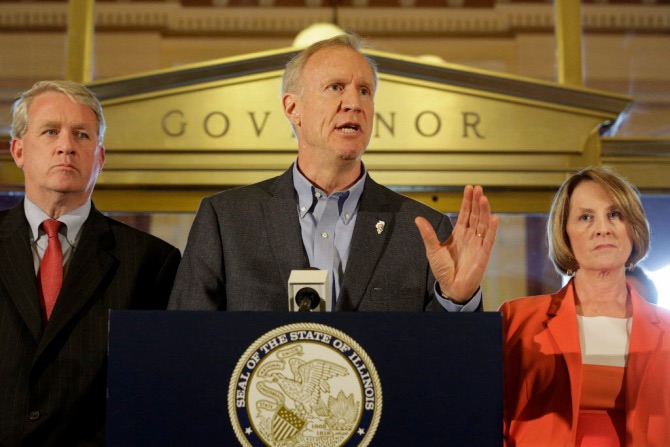 Illinois Governor Bruce Rauner signed a series of stopgap budget bills to ensure schools open in the fall and fund state services for the next six months.

Two CPS-related bills were also signed into law: a $215 million pension pickup for the Chicago teachers’ pension fund, and a bill that allows Chicago to raise property taxes earmarked for teacher pension.

“In fact the money will go directly to the pension fund. It will not stop on its way to the Chicago Board of Education,” said House Majority Leader Barbara Flynn Currie.

Addressing the media for the first time Thursday, Rauner called the stopgap a “grand bargain, grand compromise” that is “just a small step in the process of making Illinois strong and healthy and vibrant. This is a small step in the right direction.” He praised Republicans and Democrats alike for working together to negotiate the deal, extending special thanks to Senate President John Cullerton and Chicago Mayor Rahm Emanuel for their “flexibility and creativity” during the negotiating process.

House Speaker Mike Madigan noted Rauner set aside his agenda for changes to the business climate that Democrats oppose but acknowledged Democrats didn’t get everything they wanted either.

Senate President John Cullerton – a Chicago Democrat – says it’s an indication of what can be done when all sides work together. Other representatives on both sides of the aisle agreed.

“There’s a better way of going about this process,” said State Rep. Jim Durkin (R-Westchester). “The finger pointing needs to start coming to a close.”

“I think we have a very reasonable approach to many of the problems that have been grappling with all session long and I think this is a good start,” said Flynn Currie.

Besides education, the stopgap budget also provides funding for road construction projects, higher education and human services. And there’s even more good news for Chicago residents – money for CTA projects is also included in the deal.

“It will allow money that is in this appropriation bill to be used for past due bills for all of the senior agencies, autism funding, immigrant/refugee, after school programs that have not been paid this year,” said State Rep. Greg Harris (D-Chicago).

While the budget was a bipartisan effort, not all lawmakers voted for it and some are furious the temporary spending plan just kicks the can down the road.

The deal follows an 18-month stalemate between Gov. Rauner and Democratic leaders.

The Associated Press contributed to this report.