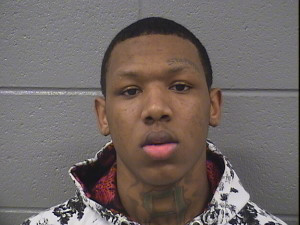 Chicago rap artist Rondo Numba 9 was sentenced to 39 years in prison Tuesday for the 2014 slaying of a livery driver on the City’s south side.

The Rapper’s real name is Clint Massey, 19, was charged with murder along with 21 year old Courtney Ealy (Cdai 600).

On Feb. 22, 2014, Massey and Ealy were part of a group who drove three cars to the Wentworth Gardens apartment complex, where they were going to retaliate for an earlier shooting, prosecutors said.

As they arrived in the 3700 block of South Princeton, Massey and Ealy saw 29-year-old Javan Boyd sitting in the driver’s side of his parked vehicle and got out of their vehicles, prosecutors said.

They approached the passenger’s side of Boyd’s car and fired numerous times, prosecutors said. They returned to their vehicles and took off.

Boyd, who had been waiting for a customer, was taken to Stroger Hospital, where he later died, authorities said.

The shooting was captured on Chicago Housing Authority video surveillance.

Ealy was previously sentenced to 38 years in prison.

Story from The Chicago Suntimes