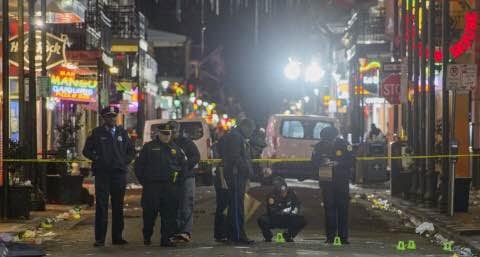 One person is dead and nine others were injured during the Bayou Classic this weekend in a popular tourist attraction located on the heart of New Orleans, according to officials.

Police say the shooting occurred just before 1:30 a.m. Near the intersection of Bourbon and Iberville streets in the city’s French Quarter New Orleans Police Chief Michael Harrison told reporters during a press conference. At least 30 officers were patrolling the French Quarter at the time because of the annual college football game.

Harrison said Police are not sure as to why the victims — two women and eight men —were targeted  or what was the cause of the shooting. However, two men, including one of the victims, have been arrested for illegal possession of a firearm.

“We’ve made a strong message that this was not the place or time to bring firearms to the French Quarter during the Bayou Classic event or any event,” Harrison said at a news conference early Sunday. “This was not something that should’ve happened. This is the wrong place to bring firearms. We’ve made that clear.”

Eleven people, including the two on Sunday, in the past two days, who have no connection to shooting were arrested for carrying weapons.

Police did not say whether any of the victims, or the two men who were arrested, knew each other. Harrison said investigators are looking for witnesses and interviewing the injured. The ages of the victims range from 27 to 37 in age according to the Times-Picayune.

According to Ronnie Buendia, a cashier at a nearby parking garage on Iberville Street, said he heard about four shots. “Everybody was running into the garage to get away,” he said.

“This is a very tragic and an unacceptable set of circumstances, especially on a night like this,” New Orleans Mayor Mitch Landrieu told reporters.

About a year ago, a man was fatally shot on Bourbon Street not far from the site of Sunday’s shooting, the Times Picayune reported. That shooting occurred after an argument.

In 2014, 10 people, including a woman who was killed, were shot as tourists walked along Bourbon Street, according to CBS News.