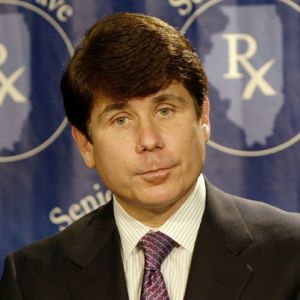 On Friday, the ex-governor petitioned President Obama to commute his 14-year sentence. This comes the same week he appealed his sentence once again.

Over 100 of his fellow inmates wrote letters of recommendation to Blagojevich’s judge telling of his good behavior and leadership skills while behind bars. Blagojevich, 60, is spending his days as a history tutor while serving time on corruption charges. He was found guilty of selling Barack Obama’s Illinois Senate seat once it became vacated in 2008 among other charges, including lying to the FBI.

In August, during a re-sentencing hearing, U.S. District Judge James Zagel refused to lower his sentence saying there was enough evidence of serious wrongdoing and the 14-year sentence does indeed match the crime. Especially since five of his 18 counts were already tossed out on a technicality. His attorneys were asking for nine years off the sentence, which began in 2012.

Seeing how his previous appeals were a no-go, if this request is denied again, it will leave Blagojevich and his team with only one last option: petitioning the United States Supreme Court. It’ll be a Hail Mary move considering this past March, the Supreme Court already agreed with the lower courts’ initial ruling. They said he crossed the line once he considered accepting money in exchange for naming a person to fill the position.

At this rate, Blagojevich will not be released from the low-security, federal Colorado prison until May 2024. In the letters to the judge, the inmates portray the former governor as humble, a natural leader and self-effacing. He’s apparently helping those close to getting out land a job and study for their GED.

Another fun fact about Blago’s life behind bars, according to the Associated Press, he’s also performing in an Elvis-inspired rock band.

Side note: Pres. Obama made history this week when he issued 78 pardons and commuted sentences of 153 prisoners. This was the most in a single day. During the last 8 years, over 1,320 people have received reduced sentences or pardons.

If a person is having their sentence commuted, it means their time is shorten but does not change the conviction. A pardon is the president’s forgiving the person’s crime if the prisoner can prove they will lead a productive, law-abiding once they get out. With Obama’s term ending, any remaining petitions will be decided by Donald Trump once he takes office.