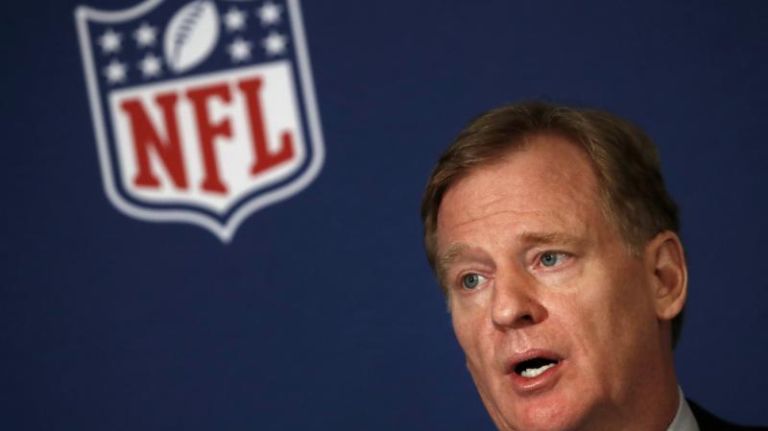 The NFL protests have sparked much debate over the last year, with many players joining Kaepernick by kneeling or by locking arms during the national anthem. The opinion on this topic has been widely split, some people say that players should be able to protest as they right to free speech and peaceful protest in this country; others say that the protests are a distraction to the game and that players aren’t being paid to voice their political views.

On Wednesday, May 23, NFL commissioner Roger Goodell released a statement that said that any player or personnel who does not stand for the anthem will be fined. The new policy also states that any player has the option to stay in the locker room during the anthem, rather than having to be on the field. The decision has been made after the decrease in viewership after the protests occurred. The decrease of the viewership can be caused either by people standing with Kaepernick, choosing not to watch until he plays; or because of people not agreeing with the protests at all.

The NFL Players Association also commented on the new policy, stating that the league had not consulted the union and that this decision is not a compromise, and accuses league officials of hypocrisy. Some NFL players have also voiced their opinion on the issue saying, “Everyone loses when voices get stifled.”

President Trump, who isn’t a stranger to giving his thoughts on this particular topic, shared how happy he was about the new policy during an interview on “Fox and Friends” that aired Thursday, May 24th. “I think the people pushed it forward,” Trump said about his thoughts on how the policy came about, he credits himself on bringing the idea of reprimanding players for not standing for the national anthem, but ultimately giving that credit to the people who found the protests intolerable.

This also raises a new claim by Colin Kaepernick’s lawyer, Mark Geragos. According to espn.com, Geragos shared a link on twitter with a case law that states that it is unlawful for a government official to influence a private entity‘s employment decisions. Kaepernick as well as 49ers safety, Eric Reid, both have lawsuits against the NFL that state that they are free agents because of their peaceful protests.

What are your thoughts on this issue? Do you think that it’s right that the NFL implemented this new policy? What are some other solutions to this problem? Comment below and stay tuned with #TheWord.

#SteveKerr on the #NFL and their recent rules on "Patriotism" … 🙌🏽

"Americans can once again come together around what unites us – our flag, our military, and our National Anthem." Vice President Mike Pence tweeted his response to the #NFL's new national anthem policy.