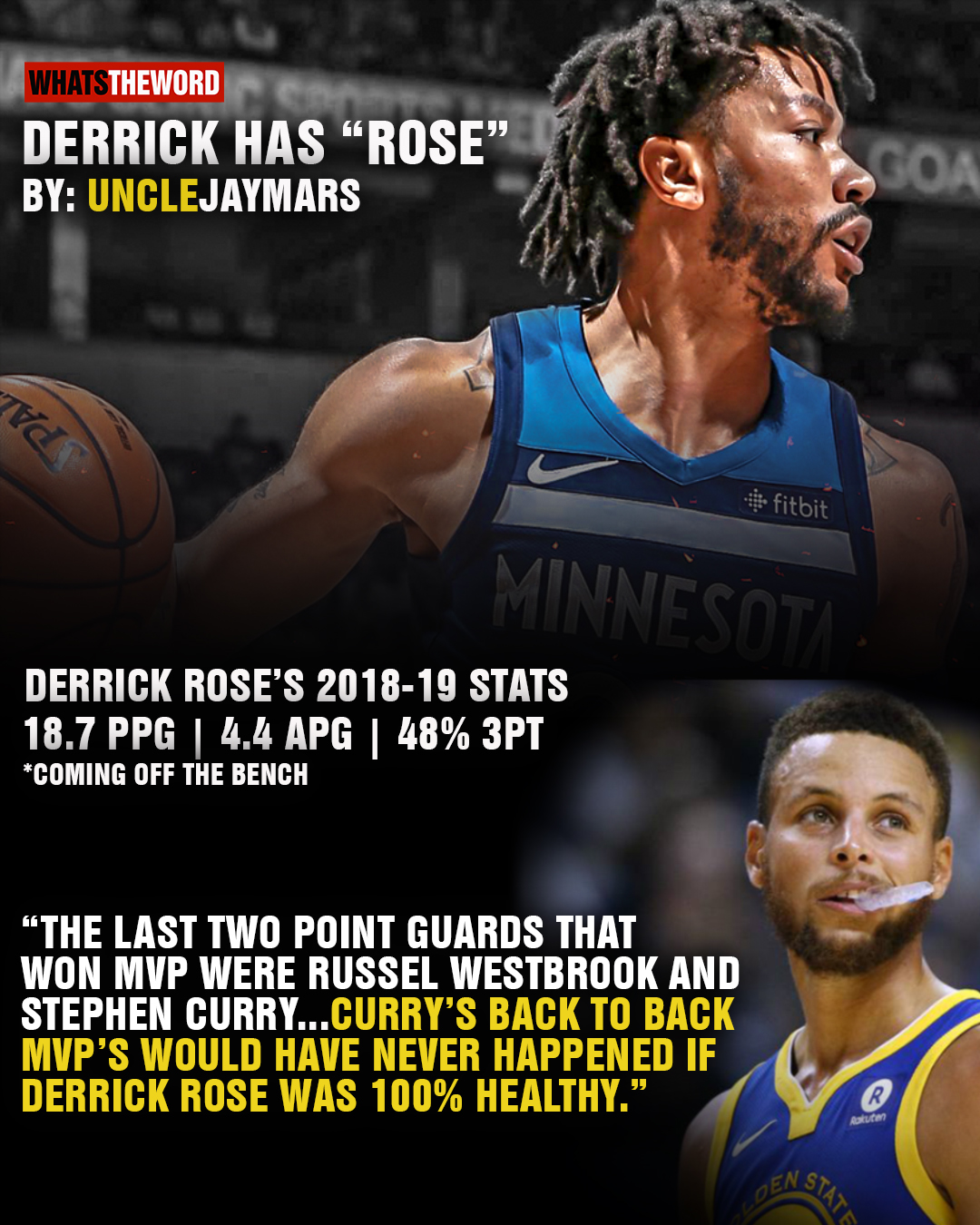 Derrick Rose, what comes to mind when you hear that name. Do you think of greatest, do you think of what could have been, do you think he will return to prime D Rose. Hi it’s Jamari Roberts-Brooks otherwise known as UncleJaymars and I’m here to tell you why I believe the Derrick Rose we all loved in 2012 is back and should be an All-Star this year. Now Derrick Rose has had a long string of injuries from his ACL tear to breaking his orbital bone in his face, but that hasn’t stop him from returning then getting injured and returning again. Derrick Rose is a born superstar who in his prime was capable of being one of the greatest of all time. But now he is just a backup on the Minnesota Timberwolves behind and I mean no disrespect by this but Jeff Teague of all people. Derrick has stated he wants to become 6th Man of the Year this year but I believe he is capable of being better than that. I believe Derrick Rose is at an All-Star level and deserves to be on the All-Star team even though stars like Stephen Curry, Russell Westbrook, Donavan Mitchell and Damian Lillard will probably get the nod instead. My hope is that he will be voted in by the fans this year because honestly, he’s “worked his ass off” in his own words.

WOULD HE BE THE BEST POINT GUARD IN THE LEAGUE?

Before Derrick Rose was injured, he was on pace to be the greatest point guard to play the game of basketball. Just think about this it took the combined effort of LeBron James, Dwyane Wade, Chris Bosh to stop Derrick Rose in the East. All the Bulls needed was a second scoring option and they were headed to the NBA Finals. Speaking of the All Star game from earlier, Derrick Rose lead all voters in 2012 and best believe he could have kept that up for years to come. Jrue Holiday, John Wall, Deron Williams, Rajon Rondo and even Kyrie Irving would have had to take a back seat to the real all star. Let’s not forget the greatness that was Derrick Rose. The last two point guards that won MVP were Russel Westbrook and Stephen Curry. Now Russel’s I can’t take his away due to him averaging a triple double but Curry’s back to back MVP’s would have never happened if Derrick Rose was 100% healthy.

Oh what’s that, you think Derrick Rose sucks now? Well let’s look at the numbers. Rose is averaging 19.2 points per game as of 11/16/18. That is in fact more than his rookie year and even more than his stint in New York with the Knicks. On October 31, 2018 Rose put on his 2012 D Rose costume an dropped 50 on the Utah Jazz, the team that waived him after he was traded from the Cleveland Cavaliers. Although he has started a few games he has been dishing a solid 5 assist and pulling down 3.5 boards per game. Something that has been holding Rose back is his consistency from three point land. Well this year he has stepped his game up and as HaHa Davis would say “HE PULLING PULLING”. Rose is 48% from three which is more than his 45.7% field goal percentage and is right now top ten in the NBA. Derrick Rose is playing his heart out and when he gets the minutes, he is defiantly showing what he is capable of.

The Minnesota Timberwolves are in a bit of a pickle right now with the whole Jimmy Butler vs. The Starters situation. If you haven’t heard by now, Jimmy Butler was having trouble with the organization and teammates Karl Anthony-Towns and especially Andrew Wiggins. Butler took the third string players and beat first string starters in practice. Now that Jimmy Butler is now since traded to The Philadelphia 76ers that locker room problem has now since been solved…. Hopefully. With Butler gone that have opened up more opportunities for Rose to shine. I’m already expecting Rose to get more minutes but with these minutes I’m hoping he stay clears of injuries and produces the way he has been doing of lately. Derrick Rose is not just an All-Star but a global SUPERSTAR when healthy. I pray for them knees and what my mother refers to as “the glass child who need to be put in a bubble”. Derrick Rose will be a All Star this season and just like Naruto would say you can “Believe It”.