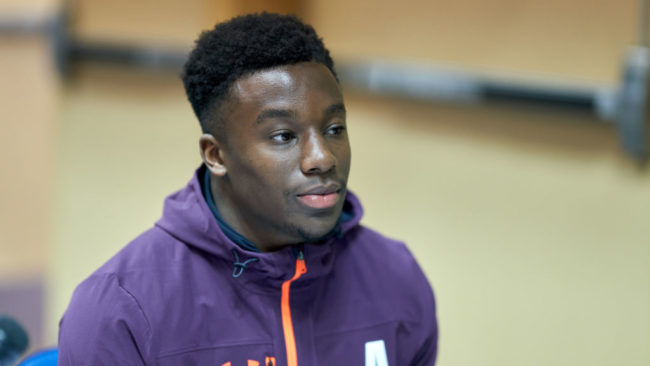 The shooting occurred hours after the Washburn University senior was selected in the NFL Draft on Saturday (April 27). The Topeka Police Department said their officers responded to a “disturbance with gunshots” at an off-campus location around midnight on Sunday. Upon arrival, they discovered Simmons dead. Ballentine was taken to a local hospital where he was treated for non-life threatening injuries.

“we are aware of the tragic situation and continue to gather information. We have spoken to Corey, and he is recovering in the hospital. Our thoughts are with Dwane Simmons’ family, friends and teammates and the rest of the Washburn community.” The Giants responded statement

Ballentine was the seventh pick of the sixth round, and the 180th overall. He was also the first player out of Washburn to be drafted since Cary Williams went to the Tennessee Titans in 2008.

It’s all a crazy dream until you do it. I can’t even explain the emotions I have right now. Blessed with the opportunity to live out my dream. Shout out the people that told me to pick a more realistic career. This is as real as it gets. Thank you to the Giants organization for believing in me. It’s only up from here. #GiantsPride

IT’S DAME TIME
THE WORD | Was Kevin Durant ‘misdiagnosed? Are The Warriors to blame for Achilles injury?

U.S SUPREME COURT CUT OFF LIFELINE FOR INNOCENT PEOPLE TO GET THEIR CONVICTIONS OVERTURNED