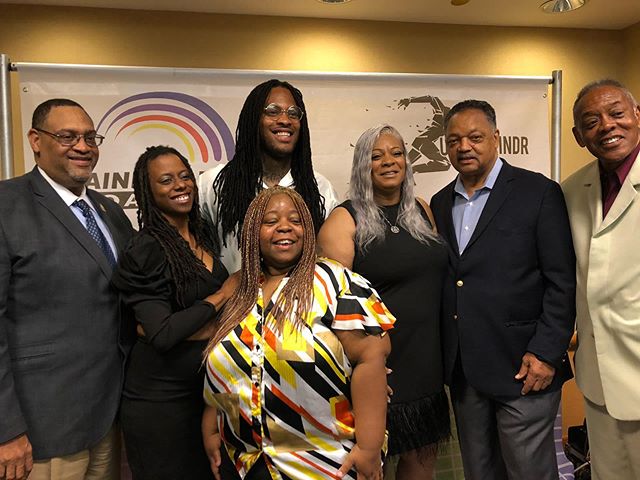 On Monday July 1st, The Rainbow Push Coalition hosted the Independent Music Seminar in collaboration with SuperGrindR. The night was full of special guests such as Waka Flaka, his mother Debra Antney, Chicago’s own Bo Deal, and many others.

This panel was highly informational and interesting. The main takeaway points were how to protect yourself in the entertainment industry, validating yourself, and speaking things into existence.

When I say @debra4mizay gave the most amazing thank you speeches I ever heard. It was ten minutes long so I uploaded it on my Brad Kelly Facebook page. You might know her as @wakaflocka mom, Growing up hip hop, Love and Hip hop but she is an incredible business woman. She spoke with everybody that asked her questions. She keep it totally honest. Deb truly does not get the credit she deserves. #Imsseminar

National best-selling author, Angela Stanton-King, spoke about her life in prison. Giving words of encouragement to everyone in the audience, I learned of the prison reform work she has done.

Yep that's me 😂 at the Independent Music Seminar hosted by the Rainbow Push Coalition Democratic Convention passing out Red Pills 💊 I really enjoyed my time in Chicago with @revjjackson @debra4mizay @godfatha19 @enchantedpr @wakaflocka I can't really explain it. All I can say is that it's a Black Conservative thang 😘 Thank you for inviting me. #Politics #America🇺🇸 #ImVotingToFreeMyPeople #1stStepAct #2ndStepAct #Trump2020 #blacklivesmatter✊🏾 #IllegalImmigration #EndAbortion #Alveda'sBaby

Brenda Robinson, who is a Chicago native from Roseland gave advice of giving back to the community you’re from. She also talked about how Chicagoans don’t have to leave the city to become successful.

Debra Antney spoke on how unity in the Black community is needed now more than ever. “There is strength in numbers” she shouts to the audience. She also spoke about her work in artist management and her Hip Hop roots.

The Masters Class seminar was moderated by Rolling Out author, Christal Jordan. The panelists for this included recording artists, Waka Flaka and RTS Management founder Bo Deal; his artist El Hitta made an appearance. The highlights from their talk included using your gift to get away from the hood life, saving money, and putting your city first.

The cucumber challenge was also brought up. Waka and Bo were asked to give their thoughts, they spoke on the importance of daughters having fathers in their lives.

I AINT GOTTA TELL YOU ME AND MY BROTHER @wakaflocka HISTORY!! JUST KNOW THIS SHIT IS REAL & LIFE LASTING!!! Shout out to @godfatha19 and the rainbow push coalition for putting together a free event for the people!! I LOVED BRINGING MY RTS STAFF TO PICK UP HELPFUL TIPS ABOUT THE GAME!! STAY TUNED, THIS SHIT BOUT TO TAKE OFF!!🙌🏽 #RTS

Waka gave Chicago major love when he talked about the city being one of the first to rock with him during his mixtape days.

I MET THIS WOMAN OVER 12 YEARS AGO & SHE EMBRACED ME & MY TEAM AS HER OWN!! I LOVE HER FRFR!! WE GAINED A BOND SO STRONG AND TALKED ABOUT SO MANY DIFFERENT THINGS THAT SHE STARTED CALLING ME HER LITTLE BIG BROTHER!! I CAN GO ON FOREVER TALKING ABOUT @debra4mizay NO MATTER WHAT, THIS IS MY FAMILY AND I LOVE HER FOREVER!!🙌🏽

The night was jammed pack with knowledgeable people who used their experience to drop gems. Jesse Jackson even made an appearance and gave words of wisdom.

Check out more photos from the night below!

It was amazing " The Independent Music Seminar " Get ready get moving Should have seen you there but you wont miss the Master Class coming in August 2019. Chicago

Proud of these two young ladies @barbara_aka_bam x @newsense4ever. They were very deserving of these awards. Been down with both young ladies for many years.

Rev. Jesse Jackson has been fighting the good fight for over 50 years and he's still going strong. Thx @jdaylightmedia & @streetbullies for the invite