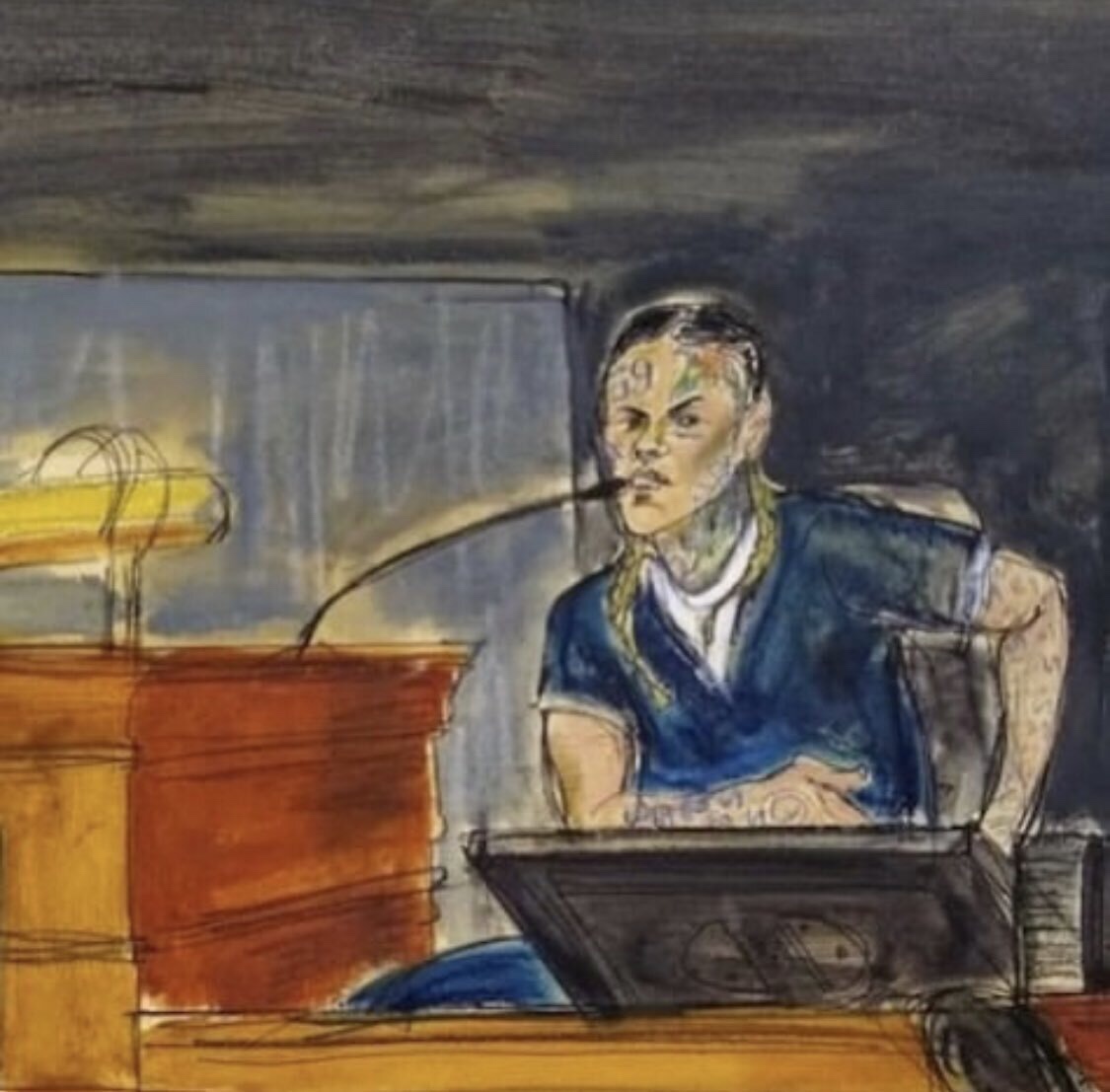 In a third day of testimony, the rapper known as Tekashi 69 (or 6ix9ine) told a packed federal courtroom in Manhattan that he was not the only well-known rapper associated with the Nine Trey Gangsta Bloods, a gang that prosecutors say is responsible for a string of violent crimes throughout the city.

As prosecutors were about to play a recording of a phone conversation, 6ix9ine, whose real name is Daniel Hernandez, was asked to identify the voices on it. He said one of them belonged to Jim Jones, whom he called a “retired rapper” and said was a member of the gang.

On Tuesday September 17, the popular yet controversial rapper Tekashi 6ix9ine had his first day of trial. The rapper has been incarcerated since November of last year for racketeering and gun-related charges. During his brief time spent in jail and awaiting trial there has been a lot of chatter regarding his cooperation with law enforcement. Social media has ran rampant with memes, tweets, and jokes regarding the rapper’s lack of loyalty to his team and other rap colleagues. But, with Tekashi’s testimony, those rumors were put to rest.

Tekashi was facing multiple years in jail for his crimes. The rapper has been incarcerated for the past year and since then has accepted a shorter sentence by cooperating with law enforcement as a government witness. When asked in court

“At what point did you start cooperating with the government?”

He replied “The day after”

Referring to his second day in custody. Thus, as a witness, when the rapper was asked to testify on the stand, he did the expected… snitched.

During the trial the overnight sensation, was asked several questions regarding his former gang the Nine Trey Gangsta Bloods, and the role he played in the gang. According to Tekashi’s statements his role in the organization was majority fincancial benefit for the gang. He claims that the information he was given was limited as to where or whom the money went but he provided funds while they provided protection. Let’s be clear, he left no parts unsaid. He commented on inside information of the organization including initiation, and what crimes they typically performed. Along with that he went as far to naming other members and rival gang members like rapper Trippie Redd. As there was no complete video of his testimony, transcripts and quotes from that court session have been published online for all to see.

69 going up in s federal courthouse today kids! Message of the day don’t be a Internet gangsta… be yourself! #cloutisnottheroute get money

Q: were you a member of a gang?
Yes. The Nine Trey Bloods.
Q: what sort of things did 9 Trey do?
Robberies, assaults, drugs…
Q: do you recognize anyone in court?
A: Anthony Ellison has a gray suit on. Mack has a brown suit on.

As the trial continues, more information will unfold. But after the first day it’s clear that the rappers image is largely tainted. As many fans and artists have published their opinions online. Although everyone hasn’t jumped ship and deserted the artists, his fan base does appear to be dwindling. This trial and his cooperation with the government leaves many wondering will he hang up his career or is there a possibility he will attempt to continue rapping? Considering the rapper has been incarcerated for the past 10 months and hasn’t released any music, it appears his chance for a comeback might not happen. But Tekashi 6ix9ine, has certainly proved himself to be a persistent artists and one who enjoys publicity, he might try his luck at continuing his career, it’ll definitely be interesting to watch.

WHATS THE BUZZ ( MUSIC YOU SHOULD LISTEN TO WEEK OF 9.15.19 )
THE WORD | MEGAN THEE STALLION RESPONDS TO ILLUMINATI THEORIES SURROUNDING HER MOTHER’S DEATH