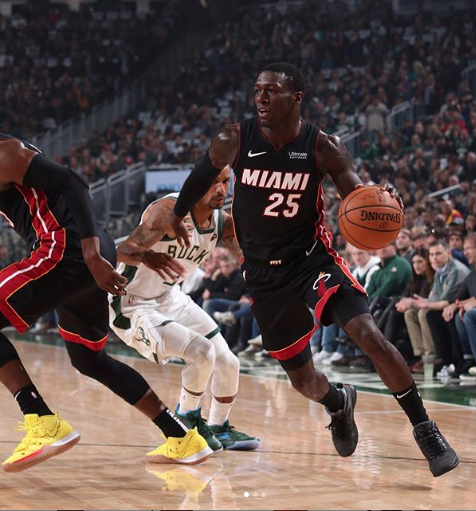 Kendrick Nunn dropped a career-high 28 points and became the all-time leader for most points through first five games (112) for an undrafted player in NBA history. As an undrafted rookie, Kendrick Nunn is shocking the league with his hot start.

Nunn has not cooled down since his NBA debut last week. Even with Jimmy Butlerback in the starting lineup after missing time due to the birth of his daughter, Nunn has not only maintained his level of play from the first week, but he’s also started every game for the Miami Heat this season. He’s set the record for most points scored by an undrafted rookie in their first five games of the NBA season, holds the record for the most points by a Miami Heat rookie in their first five games and to top it off he’s the first rookie to reach 100 points in his first five games since Kevin Durantdid it in the 2007-08 season. Nunn’s is obviously far more impressive since he’s been toiling away in the G League, but the Heat look like they have a legitimate building block for their future in Nunn.

The Chicago native played four season at Simeon Carer Academy. During his senior season, Simeon Career Academy honored Nunn’s contribution by retiring his jersey, No. 20, along with that of fellow senior standout Jabari Parker, No. 22.[5]Nunn and Parker thus joined Derrick Rose, Bobby Simmons, and Benji Wilson as the only other Wolverine basketball players to have their jersey number retired.[6] Over the course of his high school career, Nunn won four IHSA state titles with Simeon.

Nunn, 6-foot-2, spent three years at Illinois and one at Oakland University. Nunn was dismissed from Illinois in 2016 after pleading guilty to misdemeanor domestic battery.

Nunn signed a contract with the Golden State Warriors in July 2018 but was waived three months later. The Heat snatched up Nunn over the summer, signing him to a 3-year, $3.1 million deal.