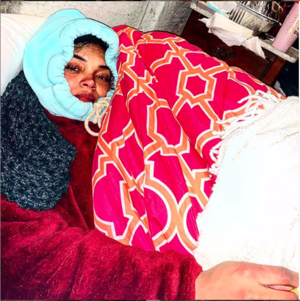 Well, known community activist Aleta Clark (Englewood Barbie) is known for providing hot delicious meals for her friends at club 51. Feeding the homeless at Club 51, located outside the police station at Wentworth Avenue and 51st Street, has become a well-known event in the city of Chicago. Many have supported Aleta in her cause throughout the years.

If you’ve been following Aleta on social media you’ll discover that the friends at Club 51 don’t go a night without being fed a nice hot meal. Her latest fight is making sure her friends have a nice warm place to lay their heads at night during this freezing cold Chicago winter. She recently posted on her Instagram that she will be sleeping outside with her friends at club 51 until the Police department opens their doors at night to the homeless.

Also, don’t forget that ALL @Chicago_Police Stations are warming centers, open to anyone in need of a warm place to get out from the cold. Contact 311 for assistance finding a warming center or to arrange a well being check. Dial 911 for emergencies.

Chicagoans are aware of the alarming amount homeless citizens we have, and as winter began to peak those citizens without the proper shelter are forced to sleep in tents under viaducts and expressways. It can be a very sad sight. The city of Chicago began to gate up certain areas, forcing homeless citizens to find new areas to find shelter.

We haven’t had the chance to speak any City officials or police officers at District 2 about why they are not allowing the “friends’ to find shelter at the station at night. I spoke with Aleta on Instagram and she had this to say.

“District 2 ( a Warming Center ) put the friends out of the police station to sleep outside in the cold 16 degrees weather….that’s why i’m upset. Why didn’t yall let them in”

During the time span Aleta slept outside with her “Friends”, the weather went below 32 degrees 6 times.

Which leaves us with the questions, Is Aleta Clark’s fight valid? Were the shelter’s open or full?

I will be out here everynight they say No.. Nd I will not go in until they can go in 🙏🏽 no warming center should be turning people away at 16degrees!!! God continues to keep me… so please stop asking me am I ok … the friends sleep in these conditions everynight we should be checking on them ..I’m Good.

When the teal city workers speak up when the truth bearer cant hold their tongue When the unheard cant hold their peace When the god sent cant stand around and see you misuse Gods people This sister has been on the front line fighting for the less fortunate for years with little help She became the voice for the voiceless #Repostthis now so we can help her fight for the forgotten We must remember our constitutional duty to provide provisions for the poor and she does @englewoodbarbie • • • • • @chicagosmayor I don’t know what it’s going to take but im waiting to hear from you… I’m waiting on you to make it right! #Club51 #JusticeForTheFriends #DoItForTheFriendsGod #WhyAreYouTurnningABlindEye #WhyAreYouIgnoringThis #MyPatienceGettingWeaker @worldstar @tattle_tailzz @wgnnews @abcworldnewstonight @abc7chicago @nbcnews @cbschicago @revjjackson @naacp

You would think that by now I’m desensitized to this…but I’m not. I drove home bothered and crying because I never heard anyone say they rather let the police lock them up so they can feel the warmth… like man “that’s crazy they won’t let us in but they will let us trespass pass so they can lock us up”😒 I told myself I would do something I didn’t know what I could do because Hell they told me no to 😤 I promise from this day forward whenever the police tells me No we can’t come in … I’m not just going to pull off Nd tell them Ima try again tomorrow Nall fuck that… I’m staying out there with them, eventually something will give.. maybe the mayor will address this “human issue”!! Them police officers Gotta stop treating people like trash on 51st Nd wentworth.. kicking people out of a warming center for no damn reason at all 😒 I know me sleeping out there will bring some serious awareness. Ima be praying the whole time that God turns it around.. that he provides us with a shelter.. that he sends us real help! .. it was 16 degrees out there lastnight and all I could tell the friends was that I tried but the police said No half of them didn’t even want to get up to eat because they were already tucked Nd warm smh🙏🏽