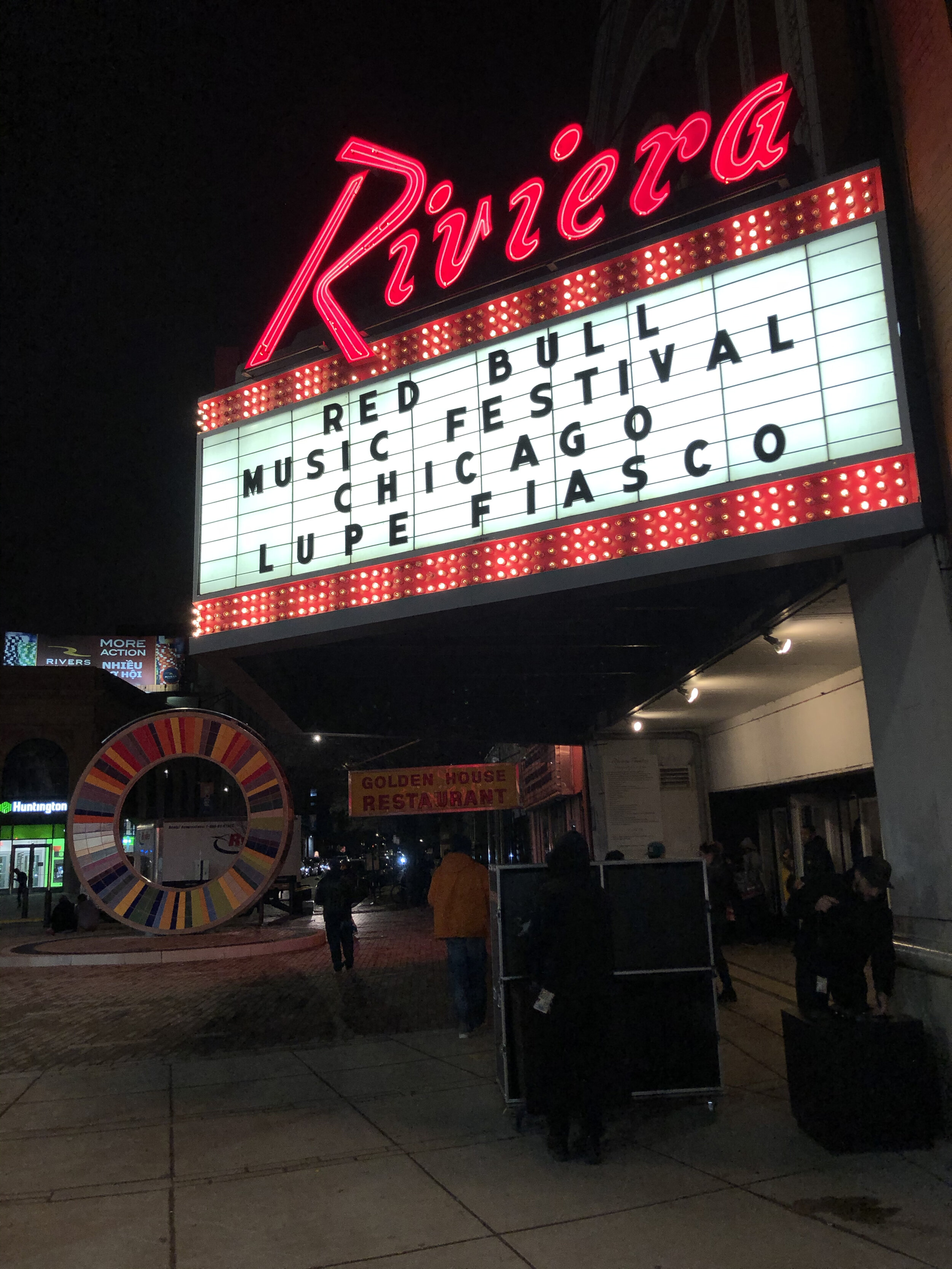 It was my first time at The Riviera, School Boy Q was having a concert around the corner at the The Aragon Ball Room, the concert was ending as Lupe’s set was about to start. The line to get inside the venue extended almost to the end of the block with fans anxious to see the main event of the night.

My Bulls Is Red. Thank you Chicago & @redbullmusic Was a moment. #FoodAndLiquor #TheJob 📷 c/o Cassandra

Walking inside was an experience in itself. I was awed by the architecture and elegance of The Riviera Theatre. Located uptown in the neighborhood of Sheridan Park, it makes up the Uptown Square National Historic District.

Ayesha Jaco opened the beginning of Lupe’s set with the intro from “Food and Liquor.” Poet and sister of the Chicago rapper, Jaco stood in front of the mic stand spitting familiar words from her soul to hype us for Fiasco.

After she was done, the curtains rose up to reveal Lupe wearing a Chicago Bulls Jersey, repping his home city. You could feel the love from the audience, after one song the crowd chanted “Lupe, Lupe, Lupe!”

A live band accompanied him of course, the bass of the drums sent vibrations through the audience that put you in the mood if you weren’t already. Lupe spoked to the crowd as the band played behind him showing how humble and grateful he was to be there.

“The album in the city where is was made. By a guy that was born on the West Side. Who took it all around the world. Our stories, our struggles, our strives, and our solutions. Remember that. As we continue…”

You could hear fans reciting every lyric as Lupe performed as if they were embodying him. He reminisced on old times by telling the story of getting the email about his Grammy nominations for best rap album and best rap song. Taking concert goers on a trip back to 2006 when he had a blackberry.

My favorite part was seeing the guys rocking out with their horns, swaying back and forth as the song “Daydreamin’” sent the crowd into a frenzy.

It was truly a memorable night for Lupe and Lupe fans alike.

My question of the day is this: Was the song “Kick, Push” a metaphor for selling drugs? 🤔

Live For Today, Might Die Tomorrow: 5 Things You Need To Know About Yungeen Ace’s Traumatizing Story
WHATS THE BUZZ (MUSIC YOU SHOULD LISTEN TO WEEK 11.24.19)