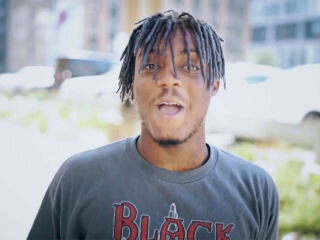 As one of the leading journalists covering Chicago hip-hop culture, I was fortunate to see Juice Wrld’s Career grow. From a young hungry kid from the Southside to megastar. Not going sit here and say Juice and I were best Buddies or BFF, who can really say that in this industry. In this industry, everyone is your friend when you are beneficial. Throughout my career, I have done my best to build organic relationships with artists, DJs, Producers, etc. Juice and I had enough genuine moments to build a dope bond. Juice had great energy.. That was the nature of our friendship, just good vibes, energy, and discussions about our goals in life. I met the kid when he was 18, would have loved to see him reach 30. Outside of Calboy I never saw artists with his work ethic. He was a legend in the making. Sending my condolences to his family. Gone way too soon…..

Back in 2017, after leaving the Lil Uzi and DJ Drama concert at the Aragon Ballroom DJ L and I was talking about changes careers lol. How ironic we bumped into some of your friends from high school. These two white kids stopped us and saiD “We saw y’all on stage with Uzi and G Herbo. You guys need to check out my homie Juice WRLD music.” They went on and on about how amazing you were, and how you rocked shows out in the south burbs for your friends. Show us a few videos. DJ L won’t admit it, but at the time I think he was over discovering new artists. Me, I’m like “Give me his number and have him shoot me over some music”. Off the first ear, I’m like shorty dope as F***. I remember texting you and saying whatever you need I got you. That’s when we began to build our friendship.

I literally saw you speak your dreams into existence. especially the Cole Bennett video, like you literally said you wanted him to shoot all your videos. You were one of the smartest young dudes I’ve met, we use to have 3-4hrs convos all the time about music and what you wanted out of life. I remember you blowing my phone up to slide with you to meetings and studio sessions. You told me about dj victoriouz putting you in Tune. The crazy thing is when I left Bibby’s Crib with DJ L discussing Bibby’s career, the first person I spoke with was you. Then 2 months later you signED to him. Crazy how God works….When lil peep died you called me early as AF, aND gave me the whole run down. We spoke about how 999 was supposed to be the opposite of the 666 devil non-sense, and how you were gone use your power

to do something special.

before the deal you spoke with me about managment. I didn’t know how to do that then, but what I could help with was getting you exposure. I told everyone I knEw about YOU and played them your music. lol my ex thought lucid dreams was about her when i told her to listen.

I did the exact same push, when you reached #2 on billboards, really wanted the city to get that #1 spot, but that still a Good ass job For a Record you Recorded before the deal and just put on SoundCloud.

When I dropped that list in 2018 I said you and calboy we’re very special Man. Not only because of music, but I actually got a chance to see the insides of y’all life and how y’all approached the game. Y’all on the come up was like watching young Lebron & Melo when they first got into the league. Very special artists.

After you got on, we never spoke about your transition, always about family and health, oh and it was that kanye west convo lol.

We never got a chance to do that interview, it’s my fault you were ready. But I still got that song we recorded in the studio in 2017. You called me like Cody pull up, I’m about freestyle a whole song. We booked the session at EnvIyon.The rest was history. I Wish we had DONE another song that night you were in yo Bag. I dipped to go cover MoneyBaggYo & Gherbo in GARY Indiana for power 92. I DO REGRET NOT MAKING TO MORE SESSIONS, YOU USED TO BLOW ME UP TO SLIDE TO THE STUDIO. I’ll be riding to the joint, and it’s still my favorite record by you.

I REMEMBER WHEN YOU HAD THE SESSION WITH MILLZ & JOEY CRIB IN MATTESON. YOU WOULD RECORD ANYWHERE. AND ALL DAY. EVEN STARTED TO TEACH YOURSELF HOW TO MIX AND MASTER YOUR MUSIC. You kept it G, after being sign, I remember pulling up to shows, and you’ll stop whole conversation with others to come rap with me, had pete and Steve looking like how he know Juice lol.

It was something we needed to chop it up about, to clear the air but whats understood doesn’t need to be explained.

Rest In Peace GOD, and try not drop the rakes in line to heavens gates lol..just kidding…