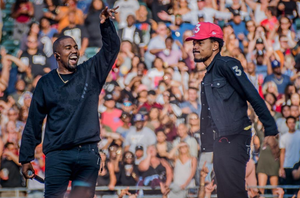 Chicago’s Congress Theater was invaded by more than 5,000 party heads for a night of sick dance mixes and insane visuals. Superfest2012 featured some of Chicago’s club DJ’s, who spent the night spinning their best collections of popular hip-hop, top ’40s, electro, dubstep, house music, and more! The festival themed party included surprise performances by thee dopest artists known! SUPER FEST was an out of body experience and an unforgettable night for Chicago partygoers.

VH1’S BLACK INK CREW CHICAGO RYAN HENRY HOSTED BBQs IN THE ALLEY ON THE EAST-SIDE OF CHICAGO. THE EVENT ATTRacted some of the city’s elite influencers, athletes, socialites + more!

THE KAPPA’S PLAYERS BALL AT SIUC

THE MEN OF KAPPA ALPHA PSI FRATERNITY INC. HOSTED THEIR ANNUAL KAPPA KARNIVAL IN CARBONDALE,IL THOUSANDS WOULD TRAVEL FROM CHICAGO AND OTHER COLLEGES TO PARTY. DRAKE PERFOMED HIS FIRST HEADLING SHOW IN THE UNITED STATES AT THE EVENT.

Chance and his team delivered a stellar lineup – from Alicia Keys to Lil Wayne — and a show long on inspirational themes. And, yes, there were unannounced cameos by a few high-profile friends: Kanye West, Common, Hannibal Buress, even the Bulls’ Jimmy Butler took an on-stage bow.

LAW CANNON AND HOOP DREAMS HAD THE MIDWEST COLLEGE PARTY SCENE ON LOCK. They even hosted a music festival that featured the legendary Chief Keef hologram performance that the police CANCELED immediately after the hologram performance began. This was a party tour like no other.