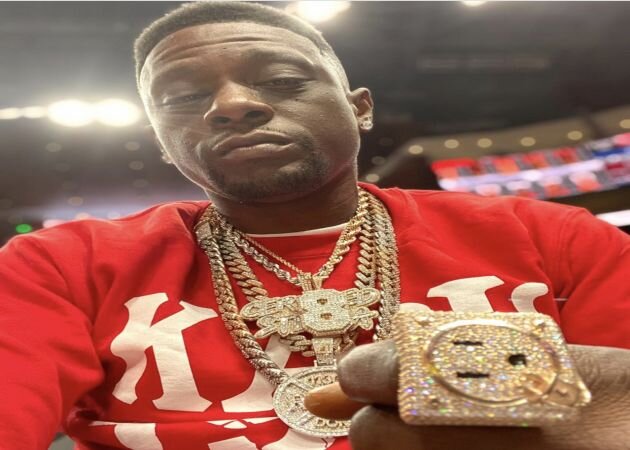 Rapper LIl Boosie has taken over the Internet, his Instagram account has become a must follow amongst urban America. Last week the rapper turned up his social media presence after he went viral for wearing a fraternity shirt a the Houston Rockets game. Social media was in a uproar, many found laugher in the matters. Members of Kappa Alpha Psi ( the fraternity letters he was wearing) made it aware that they wasn’t amused.

Boosie revealed he wasn’t aware of “how deep” the Greek life was and noted he was receiving backlash from 65-year-old members. But he also learned the frat dances to his song “Wipe Me Down” with Foxx and Webbie, so he plans to do the Kappa’s shimmy at his upcoming Boosie Bash event.

The outrage over Boosie wearing the Kappa sweater has kept him in the social media spotlight for the past week. As a way of making amends to the frat, the Baton Rouge-bred artist launched a contest to give $6,000 to Kappas doing the best stroll to “Wipe Me Down.”

Check out his offer below.

This week Lil Boosie was back in the news, this time for allegedly beating up George Zimmerman. Zimmerman known for be acquitted for the death of Trayvon Martin, is not the most welcomed in hip-hop culture to say the least. So when the false reports came out, many believed it to be true. To quiet down social media and to prevent any lawsuits Lil Boosie addressed the situation. Mentioning that he has never met George Zimmerman but, he does have some noodles releasing this Friday that the culture
should look out for.

Boosie marketing his noodles too https://t.co/EXLextxZyK

Just like the black twitter responses you can’t help but ask yourself if all this press surrounding lil Boosie a mistake, or is it strategic marketing crafted by his team? Let us know your thoughts below.

This shit pure comedy but it's great marketing cause all he doing is hyping Boos
ie Fest that shit finna be DEEP https://t.co/okzJ5Cswv6

Lil Boosie is a marketing genius

Lil Boosie is a marketing genius

Boosie marketing team is brilliant at this point, yall believe anything 😒

Boosie doing all this to promote his concert. Genius marketing 🔥