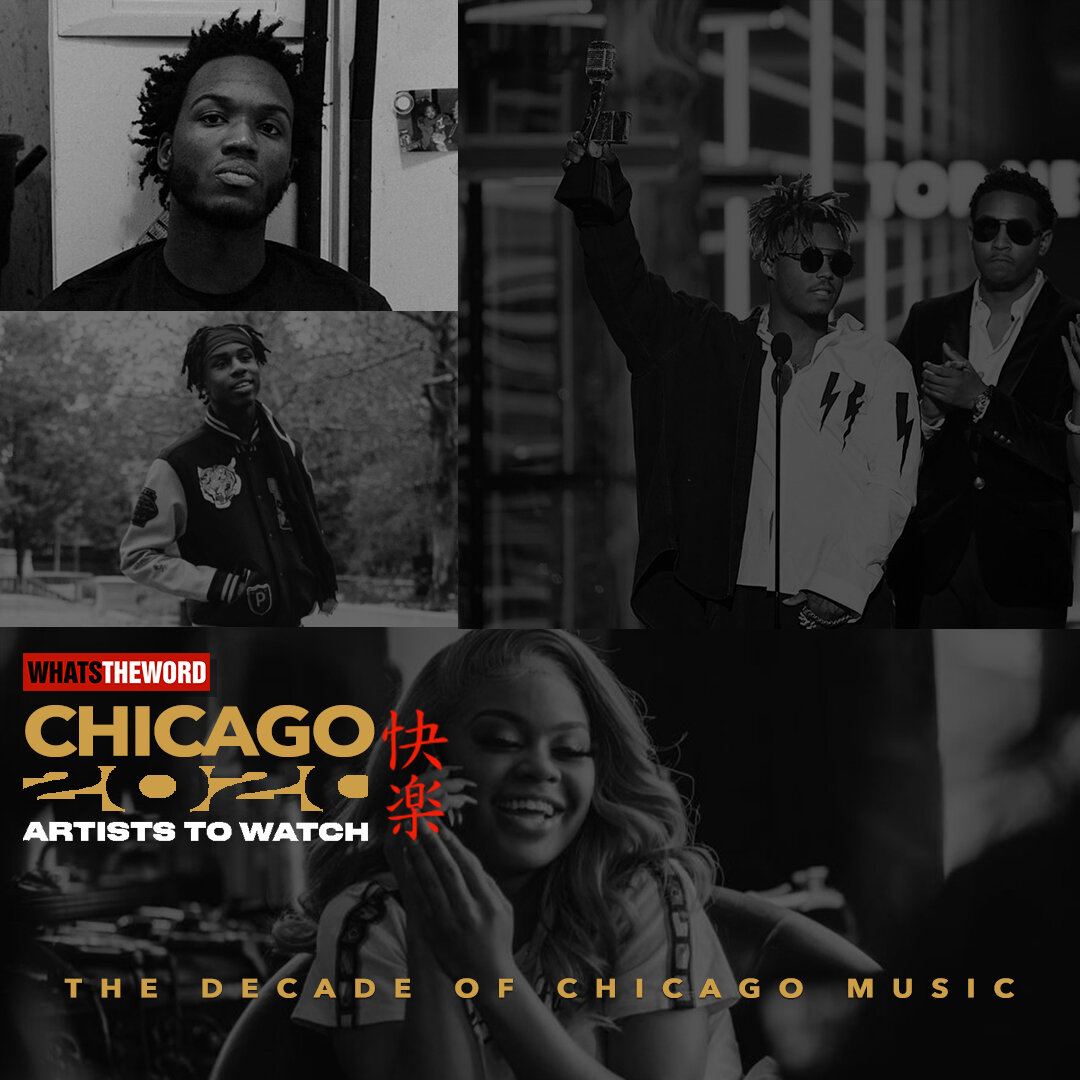 Originally the theme for this year’s class was going to be the Year of Chicago music, mirroring the DCASE (City of Chicago) theme. The Chicago officials hit it right on the head when they decided to dedicate 2020 to Chicago music, a rich music culture that is very under-appreciated. In most cases, it is unappreciated by the residents of Chicago. I believe this initiative is the first step in healing old wounds, and to help finally give our music and artists the resources and platforms needed to get national recognition. Some might say we do, but there are hundreds of talented musicians in our city, and yet for some reason it seems as if the world only knows Chance The Rapper, Kanye West, Common and Chief Keef.

Those artists mentioned are very talented but they are just a small representation of what this city has to offer. When putting together this year’s list I found that to be true more than ever. We had about 50-70 artists we were considering- cutting it down to 25 was extremely difficult. There’s 3 to 4 artists I believe will have a breakout year, and even they didn’t make it. With that much talent brewing in the city, it was no question to make the theme of this year’s list “The Decade of Chicago Music”. Chicago is now embracing one another, from DJs, artists, media, radio personalities, and other Goal Keepers. The market is growing.

The City’s narrative is changing, and 2020 is just the beginning. Chicago is not quite positioned to make that “Atlanta” run yet, but we do have enough to match the energy that’s happening in New York and California. This next decade Chicago will showcase not just Drill, but POP, classic hip-hop, trap, Gospel, R&B, Soul, etc. You name it, we are coming with it. RIP JUICE WRLD 999 Forever.

Bread doe is a very underrated pen in the City. He reminds me of Saint JHN, and you guys know how big of a Saint JHN fan I am. What sets him apart is he an R&B Artist, with a real N***a demeanor. Below is my favorite Bread Doe song, where you will see how special he is.

This is a pick I went back and forth with, honestly because her released body of work is not that strong. With that being said this pick is based off her energy, skill and team. She has a solid team behind her and a village of people invested to see her win. She has the following, the resources, the looks and she can rap.

DryBoy. is one Cole Bennett video away from being a star. His music and style matches whats popping in the music industry right now.

Many people feel like he was left off the previous two lists. I wasn’t going to make that mistake again this year. He’s been putting in his work, and with the release of his new single “Pop My”, I can see Neil Gang making a lot of noise this year.

Rackzz is a sleeper pick. His catalog of music is not that strong, but it’s something about him. He has the style, the lyrics and most importantly he has character. Character plays a huge role in the modern-day hip hop act. Being socially entertaining is how artists gain a Buzz, I.e Dababy & Megan Thee Stallion.

I saw my brother NAV Visuals post this group on his Instagram one day. I decided to check them out, and off the first listen I knew this artist/producer combo was special.

What a year ! Thank you to all of the fans and support. We dropped A Love Unknown toward the end of 2018 and you guys kept it rolling all 2019. Over a million plus total streams. Most streams. Most shows. Biggest fan growth EVER. We promised an album but needed to make it special. So 2020 will be even better. New music . Visuals. Bigger shows. Let’s get it! Tagged a few people who have absolutely helped us get to this point! 👻 📷 @navvisualz

I was not familiar with any other artists from the Pivot Gang outside of Saba. When listening to the project I became a fan but it was one track that did it for me, The Mortal Kombat record. Joseph Chilliam’s verse on there and his representation on the video stamped him for me. Outside of BARs, he has character.

I was with some of my Lil homies at a kickback in Chicago, as we were chilling they started playing Lil Randy “Shake that a**” ; the song was solid. Ever since that day I’ve been following this kid, his growth throughout 2019 has been amazing. I see him catching a spark in 2020.

Is currently on a slight “vacation” but I expect him to come home strong with some heat. Those MAF guys got the south suburbs buzzing. Teeski view count is crazy. It will be interesting to hear what type of music he will release when he gets back.

Tay Capone formerly known as Tay 600, is a very interesting talent. He hasn’t gotten a fair shot at music because of issues within his camp. Those that follow Chicago culture know of the rumors of him supposedly “snitching” on his fellow 600 members. Being labeled a rat in the streets is the hardest thing to come back from, and if you add on the beef with Lil Durk you see Tay never had a fair chance for his skills to be heard.

After sitting down with him after the allegations came out and getting his side of the story that he didn’t snitch, I was able to get a greater grasp of who he is. His road to redemption is going to be a joy to see and hear. Not one to comment on-street businesses, so I will leave that there but I do believe Tay deserves a shot and with the right guidance he can make some noise.

It’s time for Josh K, the dude’s pen game is amazing. He has established relationships with some of the top artists in the game. Major co-signs from OGs such as Fabolous. Something tells me that Josh K will have a break out year, and once he gets going it will be very hard to stop him.

Do you ever think about us? Do you ever lurk on me like I lurk on you? Tell me is there anymore trust? If I work on me, promise you gone work on you. Cause tell me when he kiss you do yo heart beat rapidly? Tell me are you living happy ever after me? Cause baby what we had I can’t find again. Baby if you fall I will be right there. I promise I will answer your call, if it’s ever a prob, just pick the phone up. All you gotta do is hit my line. I’m talking actions all verbs. Cause that speaks way louder than words. We just needed time so we could learn. I know I said that before but that’s my word. Mix: @donnrobb1989 Prod: @rodneyjonesjr

Met this kid when I interviewed some other artists, during our very first conversation I knew it was something about him. He thinks differently. Here is a guy that should be prepping for the NBA, but decided to focus on music. Great choice because he’s special. Everyone I played his music for feels the same way. Tes X will be a star doing world tours one day.

Whoever signs this kid is getting an amazing talent. His pen game is amazing. He gives me straight Juice WRLD Vibes. It’s amazing to see that JUICE WRLD legacy will live on through the next generation of artists. Thank Jordan is nice, and if you see his streams you will understand my position.

So thankful! If you were apart of this I love you fr🖤 maybe next year we hit a M!

Rio Cheeny is probably my favorite artist on this list. The majority of records stay on repeat in my car and when I’m in the gym. Songs like “Isolation”, “Ready” and of course “Cheeny Wave” are bangers. I hate comparing artists but he reminds so much of A Boogie Wit Da Hoodie, just grittier. Rio Cheeny has star potential, he just needs the right producers and co-signs and he is gone.

I stumbled across this group by an incident a few days ago when I was finalizing this year’s list. It’s because of them that the original publish date was delayed. I removed a very talented group to add these guys. TrenchMobb is amazing, they about to make some noise. (I’m talking like they are not doing millions of views already.)

The Rap duo is BUZZing through the Chicago market due to their hit record “Heavy Steppers”. They have a huge support system being signed to ATS Records, the same label that discovered HappyBirthdayCalvin. It will be interesting to see how they follow up, but as of now, Heavy Steppers are a force.

OTF Records newest signee might be the new face of Chicago Drill music.

Almost every one of my younger friends has sent me Lil Romo music throughout 2019, which made it easy for me to give him a slot on this list. I had the pleasure of interviewing this kid. He is completely different from what I thought he would be. Romo provides nothing but good energy and is very intelligent, he has star potential.