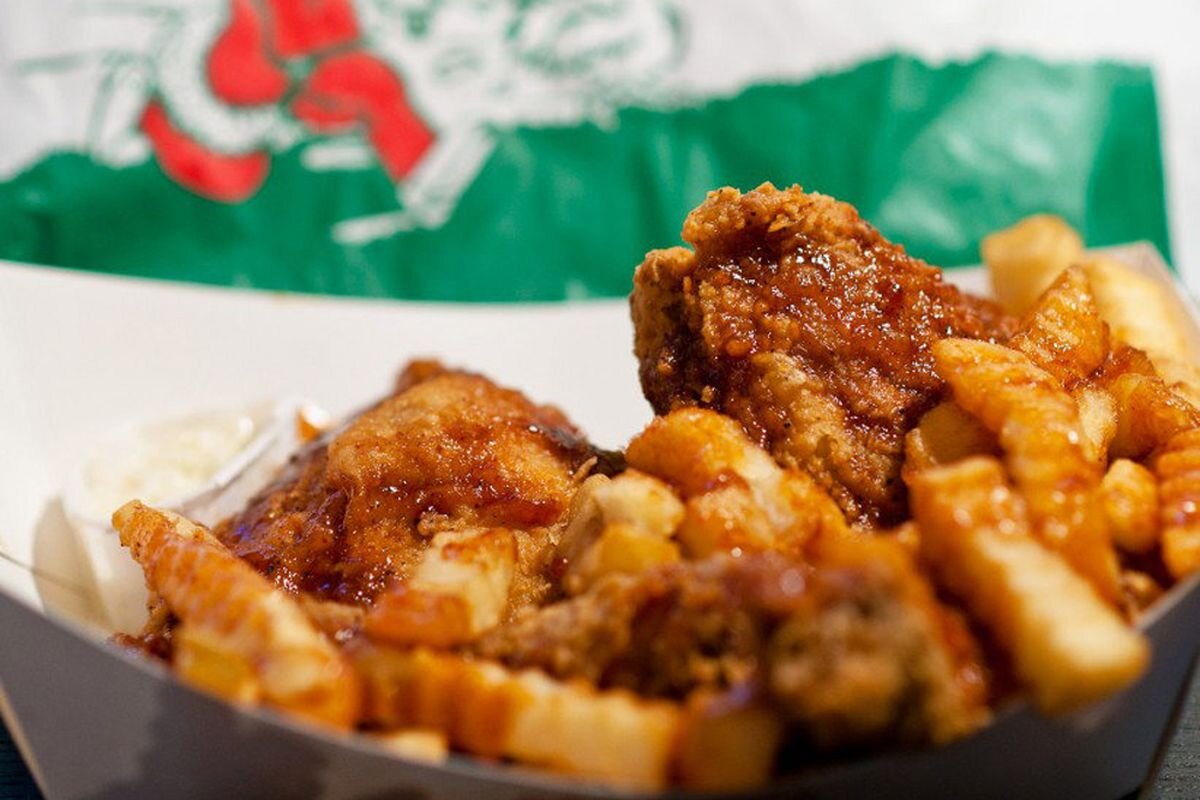 I’m sure wherever you’re from you’ve heard of Chicago’s mild sauce.  Us Chicagoans like to think it’s a mixture of hot sauce and barbecue sauce however, we really don’t know. Nevertheless, we know Harold’s Chicken Shack plus mild sauce is one of the best combinations. We recommend anyone who’s traveling to Chicago to try the crispy and seasoned to perfection chicken not only because of the flavor but because of the history it has in the Black community.  Harold’s was founded by Harold Pierce in 1950. Mr. Pierce opened the first Harold’s on June 22, at 47th and Kenwood Avenue, one block away from where he had been a chauffeur for many years. The second location was built in 1964 at 6419 S. Cottage Grove Ave. (we wonder if that was on purpose too). Mr. Pierce then began to franchise them, charging a small fee. He often lended the franchisee $50 so the owner would have change to handle the day’s business. Since then, over two dozen Harold’s Chicken Shacks have populated Chicago’s Black communities suppling good food and jobs.

Similar to Harold’s but then again not, Sharks is another chicken place you have to try while in Chicago. Sharks is like McDonalds here, it’s one on almost every corner, or a janky rip off of the chicken chain. Nevertheless, the seasoned chicken topped with lemon pepper is so good it’s mouth watering to type about. Not only is the chicken AMAZING but the fries, oh my God, the fries are “delicioso”. But honestly the taste of the chicken, the fries or even their mild sauce isn’t the best part about Sharks, THE PRICE IS! Very different from its competitor, Harold’s Chicken Shack, Sharks is very reasonable with their prices. A four piece (Chicago lingo for how many pieces of chicken you want- don’t worry, you’ll eventually catch on) at Sharks will typically run you no more than $5.50, and that estimated price might be too high. So if you’re in Chicago for All-Star Weekend and you’re on a budget check out Sharks.

That deep dish pizza people always talk about when they speak of Chicago is best served at Giordanos. The sauce is thick, the crust is thick and the cheese is even thicker.

Have you ever eaten something and knew it was bad for you? Well, this is how I feel every time I eat Italian Fiesta pizza. The grease on this pizza is thicker than the crust but it’s oh so good. Not only does the taste of this thin crust pizza help the company stand out from others but the paper bag the pizza comes in is also a great identifier. Most Chicagoans would vote Italian Fiesta the best pizza in town.

This restaurant isn’t well known outside of Illinois, but here in Chicago we will drive thirty minutes to the nearest Portillo’s to get that dipped Italian Beef (with extra hot peppers and cheese if you’re feeling daring). Portillo’s has a wide range of items on their menu, from street polishes, to salads. Whatever you’re in the mood for, they have it!

HOME OF THE HOAGY

If you are in a rush, this is not the place to go. I repeat, do not go here if you are in a rush. However, if you want something that’s sweet and tangy THIS IS YOUR PLACE. Just read the comment left on their website; “I love this place! I travel to Chicago every chance I get to eat here! 90 miles isn’t far for this one-of-a-kind sandwich. Call me crazy, but at least I’m eating good! Are you?”  If you don’t listen to me about this place being a hit, listen to the reviewer who’s driving 90 miles for this oh so good, Home Of The Hoagy.

This might be the last place on the list but it’s definitely the first one in my heart. Two Fish is a Black owned seafood boil bag restaurant and the food is one for the books. The newly renovated seafood restaurant is literally one of the best places in Chicago, as it has been featured on Chicago’s Best. The crab legs are juicy, the shrimp are juicy and the sauce is spicy! Please don’t forget to visit this gem while in town for the weekend of the year.