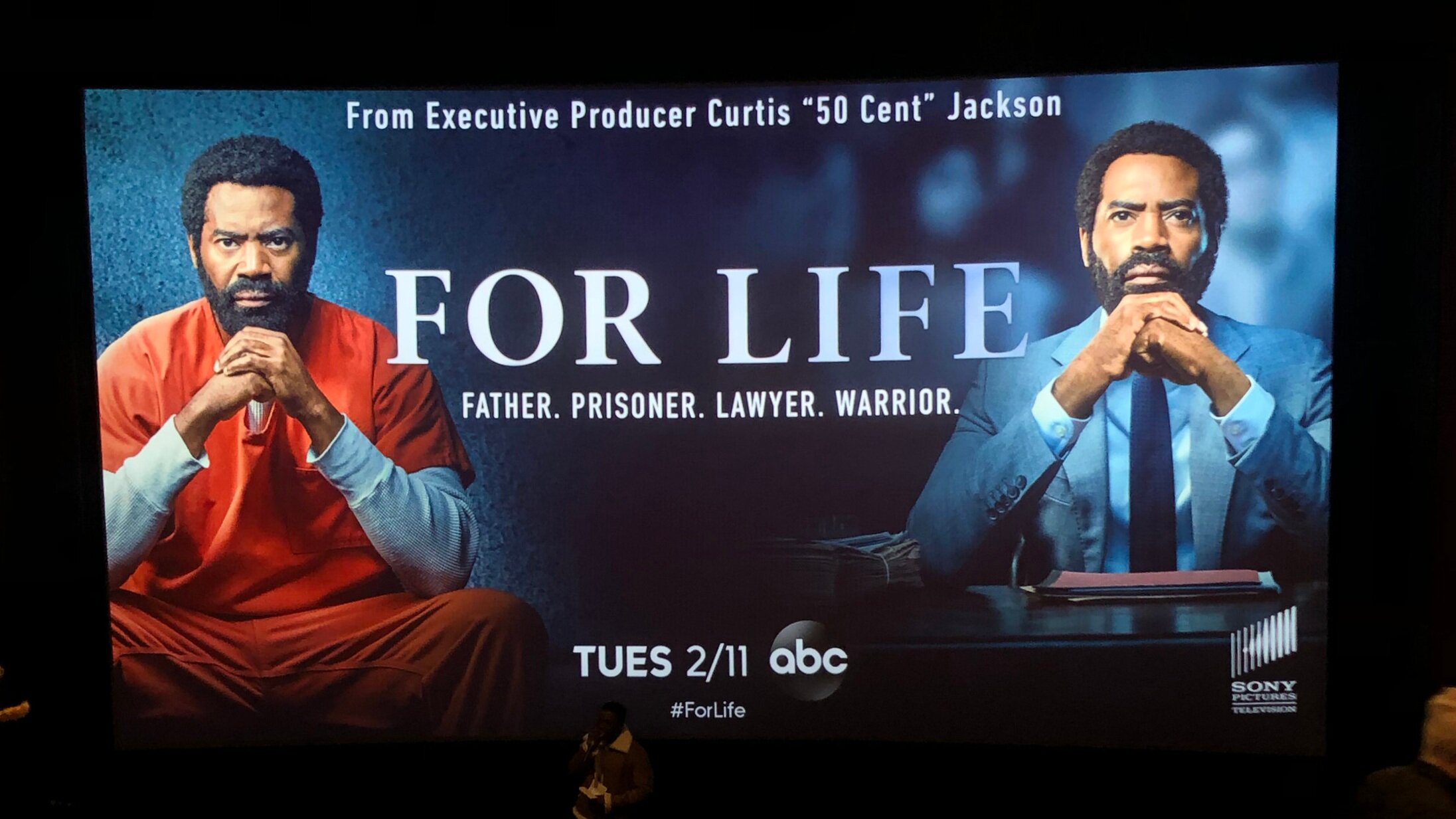 Curtis “50 Cent” Jackson is back at it again with his new show “For Life” on ABC. The series is based on the life of Isaac Wright Jr. The fictionalized series follows Aaron Wallace, an inmate who becomes a lawyer defending other inmates, while he is on the quest to overturn his personal wrongful conviction.

The Chicago premiere of the show took place at AMC River East 21 on Friday, February 7th. Community activist Ja’Mal Green hosted the event. The reactions to the show were awe and amazement. “For Life” shows a man that is fighting the injustices of the criminal “justice” system. Aaron Wilson is a symbol of resilience and perseverance.

The show gives hope. As you watch Aaron tell the story of being a family man, a person with a life that was taken away from him, you think of Ava Duvernay’s “When They See Us.” Ja’Mal makes this comparison during the Q&A after the show as he is joined by the show’s creator and writer, Hank Steinberg and stars Nicholas Pinnock and Joy Bryant.

“I sat with Isaac for many hours and made me understand what he was going through. We had to make it inspired by him and make it fictitious, but the spirit of Issac is running throughout the show. It is the essence of what he went through.” Says Steinberg when asked about how Isaac influenced the story.

Nichols Pinnock, who plays the lead as Aaron explains how he got prepared for the role. “I met Isaac and I listened to him talk, and I asked a lot of questions, and looked at his mannerisms. And something in me switched in how I was going to play him. He was available for anything I needed. He just kept giving me gems of information and introduced me to ex-prisoners that were in very similar situations to draw experiences.” The audience was shocked to hear Pinnock’s British accent, as he does an extraordinary job of playing the role of Aaron, we all assumed he would speak with the same New York accent. Steinberg let the audience know that Pinnock stayed in his accent for the 5 months of filming then reverted to his accent and people were freaking out. It was a good laugh for the audience.

“The timing of the show is so key right now. When you have republicans and democrats coming together talking about criminal justice reform and mass incarceration, the timing is right for this. I think there is an opportunity for people from all walks of life to find something to either be inspired by or either to connect with.” Says Joy Bryant on the importance of the show coming out now.

Steinburg also spoke on 50 Cent’s role in the new show. He brought the story to everyone’s attention after he met Isaac. Also, 50Cent is going to play a role as an antagonist of Aaron’s later on in the series. Be sure to catch “For Life” on abc, February 11th at 9 pm Chicago time.

@50cent new series #ForLife Chicago premiere on Friday. Be sure to check out my article about the great job @jaymalgreen did with hosting the event. Up soon @whatsthewordtv🔥

CHICAGO ARTISTS AND THEIR BASKETBALL COMPARISONS
THE WORD | Is There a “right” age for your child to consider gender preference? Dwayne Wade Introduces Zaya To The World