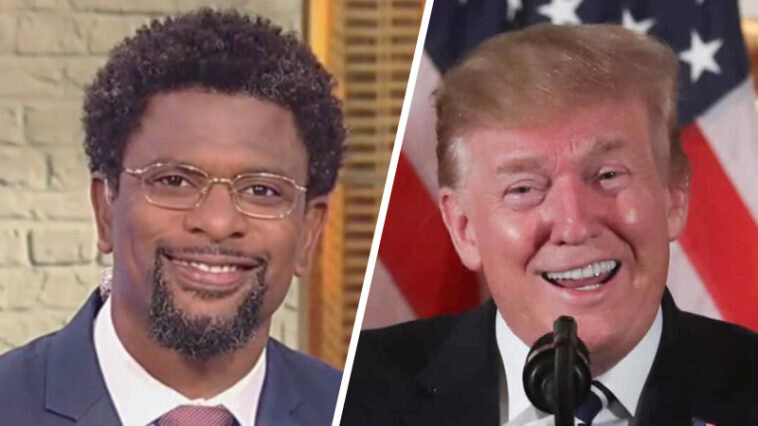 As seen in the above video the entire room clapped and applauded him after he made the remarks. According to the Washington post members of the room included leaders from the black community. Along with Mr. Brewer, Diamond and Silk, and Martin Luther King Jr.’s niece Alveda King, among others.

“I’ve been a Democrat all my life but I’m not a Democrat now,” the former Vikings player-turned-ordained minister said. “You’ve changed me. You touched me. And you made my work go to another level. You inspire me. And every time I go into those prisons and I ask my guys how many of them had their sentences reduced and they raise their hands, I know I’m doing God’s work and I thank you for that.” Jack Brewer via the Washington post

The comment was particularly stunning and had social media in an uproar because former President Barack Obama, became the country’s first “black” president in 2008.

I don’t even know who Jack Brewer is but I guess he’s a fucking bootlicker, which I guess means I know enough. https://t.co/zGt9fnBu6y

#JackBrewer an ex-NFL player, called trump “the first black president” during a round table meeting. Those fucking checks must be outstanding.

Brewer responded to the backlash he was receiving on twitter.

This is not the first time this decade that a black athlete has referred to a non African American as the first “black” president. Earlier this year NBA superstar Lebron James posted a picture with former President Bill Clinton and in the caption he referred to him as the “real first black president”.

Of course James received a lot of heat from it.

The sad part about @KingJames saying this, is a lot of young impressionable people in the black community will go along with this.

Lebron needs to just stay out of politics. @BillClinton locked up more black people than any other President. Disgusting.https://t.co/hG9izgiQKL

The various view points on this topic are extremely interesting. Do you believe being “Black” and being an African American are two different things? Drop comments below.

Art Beats + Lyrics Visits Chicago for All-Star Weekend
THE WORD| Should Spike Lee be Mad for Being Denied Entry?