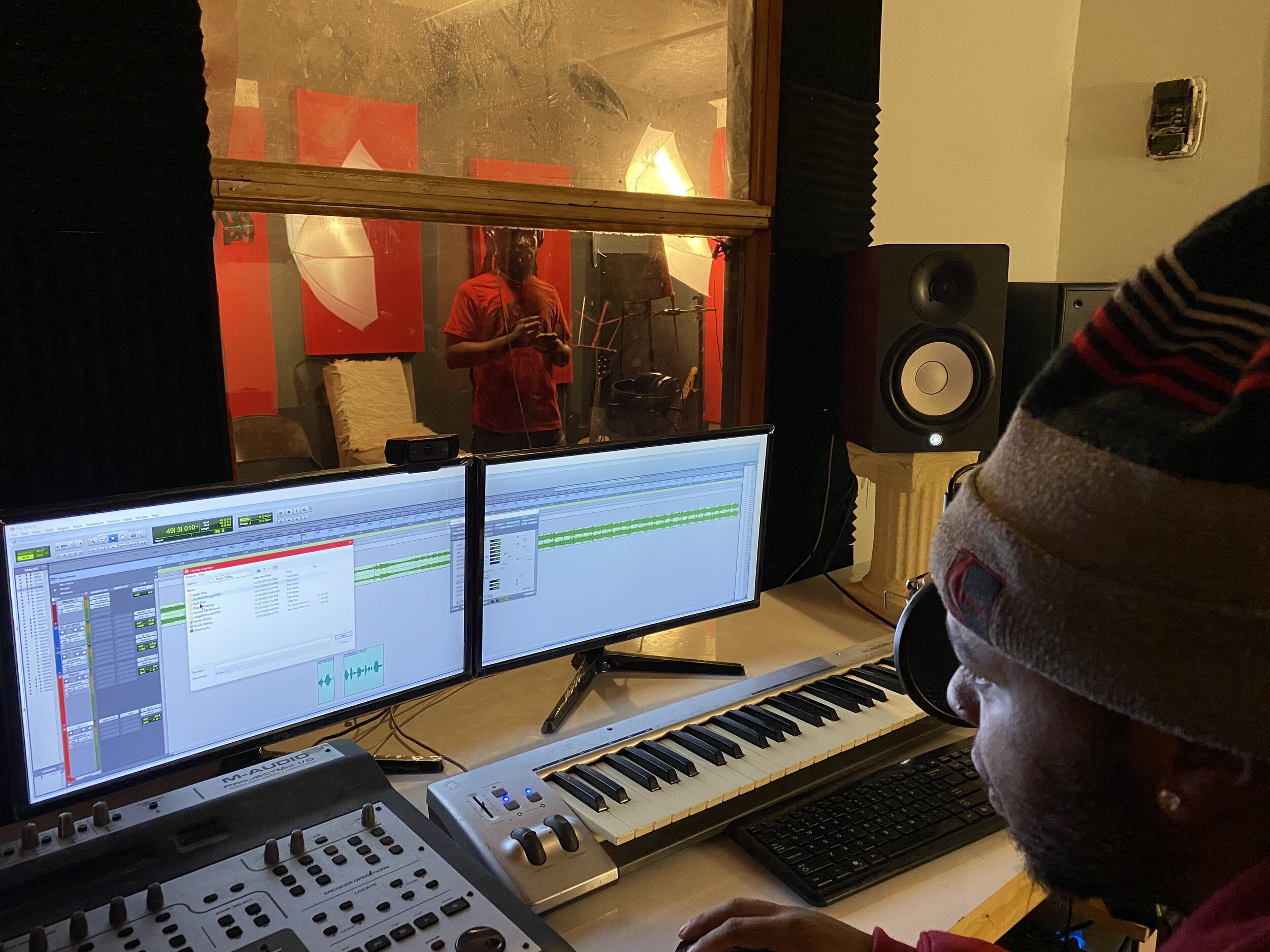 When you think of Gary, Indiana, the first thing that may come to mind is the birthplace of the legendary Michael Jackson—performing alongside his brothers to form one of the greatest boy bands in history, The Jackson 5.

Although Gary isn’t looked at as a place that nourishes talent such as New York, Atlanta, or even Chicago, there’s no doubt that talent can be found in this predominantly Black portion of Indiana as the Jackson’s taught us.

Producer J AWSM (pronounced Awesome) is working to sustain that culture in Gary. With the creation of Rebellious Star Music Studio, AWSM has the goal of creating the next Motown. The studio is located on Jefferson Street. The color red is a central theme throughout the studio, I felt it very symbolic of the word rebellious—leaving your mark wherever you are by any means necessary.

“I’m not into recording people per hour, I’m trying to make projects, I’m trying to put out records. That’s the vision, to have a staple of artists that I feel are amazing artists and just work on them to secure some type of a publishing deal.” AWSM says, sitting by his keyboard, as a ProTools session is up. The session belongs to his helping hand, Rekoj.

Rekoj is an alternative artist who has an extensive history with AWSM. He works at the studio in exchange for free studio time, he also records sessions for other artists. When asked if he would bring on other interns, AWSM said that isn’t something that he’s looking for right now—only if it were for social media promotion.

What he is instead focused on is harboring young talent; middle schoolers and high schoolers. “I’m targeting like middle school to high school-aged kids [because] they are the most impressionable, I’m doing this to help keep them out the streets,” AWSM says as he sets up his new SE Gemini 2 microphone in the sound booth.

It is significant for ASWM to scout out young talent for his goal of creating the next Motown, as he describes it. Stevie Wonder was only 11 years old when he signed with Motown Records and Michael Jackson just a year younger when Berry Gordy signed the Jackson 5 in 1978.

For Rejean, 17, who goes by the name LilRayy, Rebellious Star Studios has been a place that has grown his courage. “He gave me more and more confidence to use my voice and bring a lot of energy in every song I’ve made. It’s always a warm welcome when I come in and it’s like I’m in a safe haven if feels amazing,” Rejean says about his experience working with AWSM.

The hourly fee at Rebellious Star is generous, with prices starting as low as $15 an hour. AWSM says the equipment that they provide can compete with studios that charge about $40-$50 an hour, but for him, it’s not about the money—but rather about molding talent to learn to be better artists, “I’m offering half the price so you get more time to actually develop a sound and get the product out like it’s supposed to sound because niggas think they’re supposed to be able to record a song in like 25 minutes.”

AWSM’s passion for music started in grade school, where he played trombone. He was a band geek, obsessed with the dream of one-day playing trombone for his idol Kanye West, these aspirations led him to play the trombone at the University of Arkansas Pine Bluff.

He speaks on how he never considered being a producer, although he was talented at making beats using the amateur software, Fruity Loops. He discovered his talent for making beats in seventh grade, but it wasn’t until college did he hone this craft and began selling beats to artists, “The whole thing changed when Jamal [a friend from college] stepped in the door and was like what are you doing with these beats type shit.” That was back in 2005.

AWSM made the decision to leave college and soon after began making a profit from recording artists at his childhood home, where his parents let him use their upstairs, and eventually their basement to his discretion.

Rebellious Star Studios has produced a variety of artists of diverse musical backgrounds—some recording for the first time, learning the ins and outs of making a record; and others who are seasoned, focused on perfecting their craft.

AWSM says even though he is creating the next Motown, he doesn’t really want to classify Rebellious Start Studios as a record label, “Record label carries a negative connotation, so I just like to say a production group. What I’m trying to do is have artists that will get signed to a major recording company and secure a publishing deal.”

People usually find out about the studio through word of mouth, but business has also been gained from flyers left in public spaces, such as gas stations.

ASWM prides himself on creating an Incubator for rising talent and teaching them the ropes while providing excellent service. He believes investing in the youth creates waves for the future and he is using his studio and talents to build that space in Gary, where it fails to exist.

2021 CHICAGO ARTISTS TO WATCH: The Next Wave
A LETTER TO THE WOMEN HELPING PUSH WHATS THE WORD FORWARD!