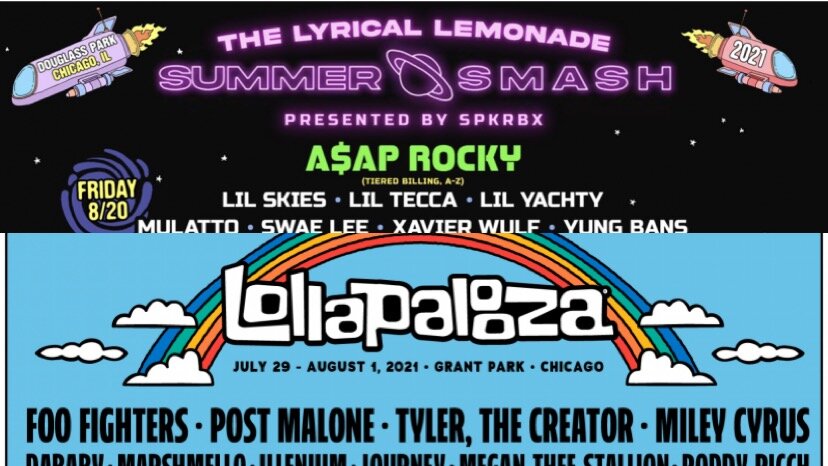 After a year of no festivals in Chicago due to the COVID-19 pandemic, some of the biggest festivals in the city are back in town. And that includes the return of Lyrical Lemonades Summer Smash festival, and Lollapalooza, the latter who’s line up was released earlier today.

The Summer Smash lineup consists of mainly hip-hop artists, as Lyrical Lemonade, founded by music video director, Cole Bennett, is heavily involved in the culture. This years festival, which will take place in Douglas Park as it usually does, has various returning artists from the 2019 set, including Lil Yachty, Lil Tecca, Famous Dex, and the City Girls, among others. Meanwhile the headliners include three artists making their Summer Smash debut: Lil Baby, A$AP Rocky, and Lil Uzi Vert.

On the other side of the city, will be the 30th anniversary of Lollapalooza. The Grant Park based show revealed it’s lineup on the morning of May 19th. The lineup is very pop and rock influenced, with guests like Foo Fighters, Post Malone, and Miley Cyrus being some of the main headliners. Lollapalooza this year does have a good Hip-Hop presence, as we see Chicago’s own Polo G make the roster. We also see Young Thug, Dababy, and Roddy Ricch make appearances as well.

While both lineups are very different from one another, it is assured that both festivals have something for fans of all different genres. Summer Smash will be three days long, from August 20th to August 23rd, while Lollapalooza will be from July 29th to August 1st.

Check below for some of Twitters responses to the Lollapalooza Lineup.

That lolla lineup rly saved me from dropping $400 pic.twitter.com/hKA4rOAzq8

i think summer smash’s lineup is better than lolla lmaooo 😭