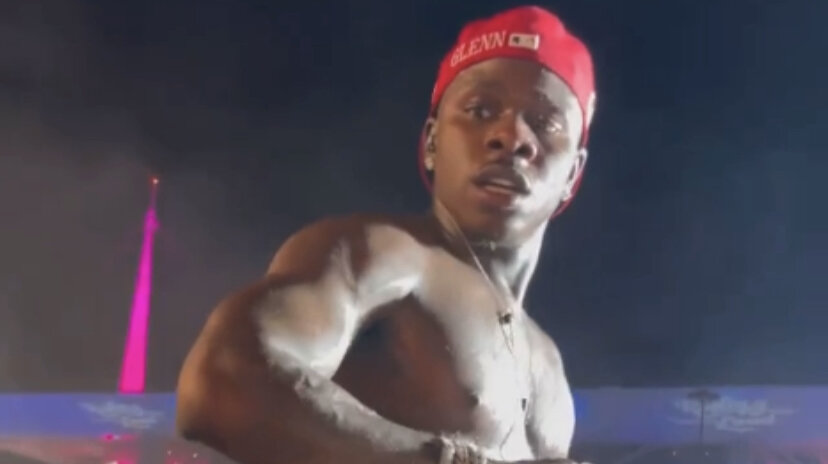 Many Megan Thee Stallion stans are heated about DaBaby’s chosen surprise guest during his Rolling Loud set in Miami this past weekend. Right after Megan’s performance, DaBaby took the Ciroc stage for his set, during which his guest walked out in an oversized onesie costume and DaBaby announced to the crowd: “I’ll give somebody out here a million dollars if they can guess who in here.” The surprise performer removed their garment to reveal that it was Tory Lanez, who had run into hot water last year after allegedly shooting Megan Thee Stallion in the foot in an intoxicated haze. The two then began to perform their collaboration project “SKAT,” which initially caused a rift between DaBaby and Megan’s working relationship earlier this year, and resulted in the two unfollowing each other on social media. When Tory Lanez walked off the stage following the performance, the next song DaBaby played was from one of he and Megan’s projects: “Cash Sh*t.” Preparing for the next track, DaBaby said, “Open up the mosh pit. Cuz this a very special song I’m about to play next. I want to see just as much love on this one if not more. This a very important song to me, cuz you know Baby don’t politics, I’m a real n*gga, I be on that Cash Sh*t!”

The shooting incident took place last July as Lanez and Megan were leaving a party at Kylie Jenner’s LA mansion. Police were called to respond to reports of gunfire after which they pulled over the stars’ vehicle and forced them to exit and lay spread-eagled on the ground. Surveillance footage from that night shows Megan limping with a bloody foot as she exited the car, after which Lanez was arrested for possession of a concealed weapon.

After initially denying to comment on the situation, ultimately Megan accused Lanez of shooting her on one of her Instagram live videos saying, “You shot me, and you got your publicist and your people to talk to these blogs, lying and shit! Stop lying!” Lanez has since denied the claims and pledged his innocence, going as far as making multiple references to Megan and the incident both in his 2020 project ‘PLAYBOY’ and his most recent freestyle with Funkmaster Flex.

Although not confirmed, fans believe that a crowd member’s decision to throw an Adidas show at DaBaby during his performance was motivated by him bringing out Lanez.

Whoever threw that shoe at dababy, you are doing the Lords work. 👏🏽

DaBaby and Megan got into a back-and-forth altercation on Twitter last month after the Tory Lanez collab, with DaBaby appearing to try and remain neutral on the situation and claiming that he always has, while Megan wasn’t having it.

My stance hasn’t changed at all YOURS has. We already spoke abt this in private and you specifically said “that ain’t even no good business move why would I promote that shit” but now this ain’t your “beef” ? That ain’t real. But you stay on ya “business” my g https://t.co/WeKAVD0xnu

Whoever cleared it cleared it, so what.
Shit still ain’t enough of my bidness for MFs to be feelin some type of way bout my pretty chocolate ass

Twitter is definitely in an uproar on both sides, with DaBaby fans arguing that he doesn’t have an allegiance to anyone and that his performance was top tier regardless, while Megan fans are dragging him and arguing that this disregard for Megan’s trauma reinforces the dismissal of harm brought about against black women.

Dababy bringing Tory Lanez out right after Megan Thee Stallion performed is not petty its evil. Tory shot that girl. He literally tried to harm that girl. This ain't no rap beef quit trying to minimize what Tory did to that girl. pic.twitter.com/Vt5lKbXDHU