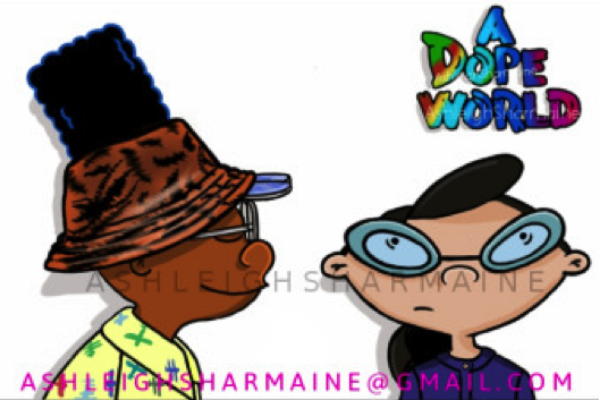 These questions and more were answered by 25-year-old Ashleigh Sharmaine when she released her unique illustrations of some familiar cartoon characters re-imagined as characters from your favorite movies, television shows, and members of your favorite historically black fraternities and sororities; as well as your favorite rappers, singers, and musicians too.

“Social media has really played a big role in my artistry,” she said. “For one it has given me an extra outlet to express myself, it has helped me develop the Ashleigh Sharmaine brand, I’ve gained supporters and customers, and I am able to turn my dreams into reality.”

Her inspiration comes from pure curiosity, though she is a huge fan of the 90’s era, which is reflected heavily in her illustrations.

Though her artwork has been met with lots of praise, no great thing is met without criticism. Some of her images of the fraternity and sorority members upset the actual members due to what they felt was inaccurate portrayal and some have even threatened to sue her.

“I expected people to like it,” she said. “I never expected the hate, nor did I create those pieces with malicious or disrespectful intent. Overall, I have received a lot of love than hate including the members of fraternities and sororities which shocked me.”

While Ashleigh has been expanding her brand, she has been met with some challenges as well, including people on the internet trying to steal her artwork.

“I was so furious and puzzled the first time it happened to me,” she said. “Now when it happens, I just have a legal team that handles it.”

“Other challenges I face include me wanting to venture off into new directions with my artwork. I want to design clothing, phone cases, and basically personalize anything for someone.”

Since art is her full time job, Ashleigh is always looking for new ways to expand her brand whether it is through developing new concepts, commission paintings, or screen print clothing.

“I have a clothing line launching soon, where you can pre-order different items for now,” she said.

“It would be amazing for the Ashleigh Sharmaine brand to turn into a successful business one day,” she said. “I want to be someone who is known for creating original and creativeone-of-a-kind pieces.”

She advises other aspiring artists to create for themselves first, and other people second.

We are sure that all of her dreams for the Ashleigh Sharmaine brand will manifest because just like she took the internet by storm, other people will soon realize that “Yo.. Ash is DOPE!”

For more information on Ashleigh Sharmaine and how you can purchase artwork, email her at ashleighsharmaine@gmail.com or follow her on social media at:

Kia Smith is a 21-year-old struggling college student who has a way with words. Highly opinionated and always right, you can read some of her thoughts at her personal blog at http://www.kiasmithwrites.com or on social media at: