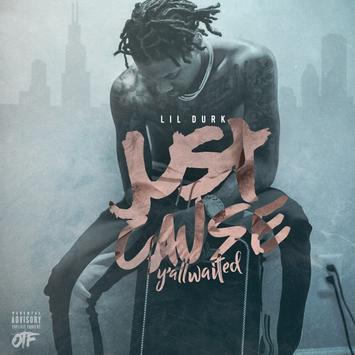 Lil Durk is back it at, with the release of his new mixtape “Just Cause Y’all Waited”. Prior to releasing this new music, Durk had just announced he has parted ways with Def Jam records after 5 years. The Chicago native has released several projects over the past two years, and surprisingly they were all filled with good music. Its obvious Durk is going through some changes in his personal life, good or bad it has made him release some of the best music of his career. This Project really illustrates the growth of Lil Durk. Great vibes from start to end.

The delivery by Durk and all his features were A1, no off the wall flows. The vocals were appropriate, no real R&B, but the usual melodic trap vocals. Not too many quotable, hip-hop lines, but the hooks are great and catchy to most songs. On the tracks “Just flow” and “When I was little” Durk give us a glimpse of his BARS, but nothing special. R&B Durk took over this Project.

The production on this project is quality, His beat selection wasn’t the best but how it flowed was perfect. From the intro with “Public Housing” and ending with “Bruddas”. listening to this project it will have one reminiscing about old times, wanting to grind harder and spend some quality time with their boo thang. Pop in this mixtape on a late night while driving on the highway, it will ease your mind. Great vibes from start to end.