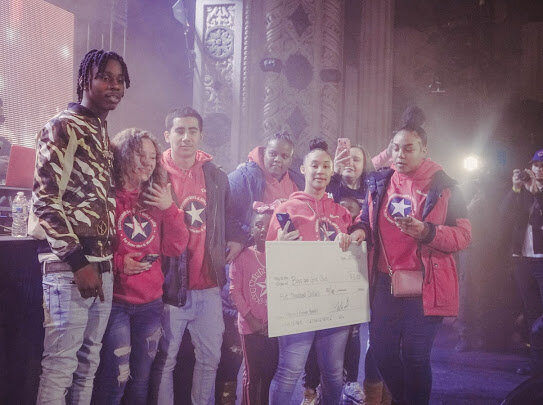 Chicago native Polo G brought the city together during NBA All-Star weekend for his First Annual Polo G & Friends Charity Benefit Concert complete with a special tribute to the late Juice WRLD. The show, in partnership with Audiomack’s Hometown Heroes concert series, held performances by Polo G himself, G Herbo, Dreezy, Calboy, Tink, NLE Choppa, The Heavy Steppers, HappyBirthdayCalvin, Ann Marie, and Sprado with a surprise performance by Jeremih. The all hip-hop line-up sold out in under a week making the event one of its kind and a success for Chicago’s hip hop community.

“The purpose of this concert was to give back to my city. I remember struggling with my own issues. I didn’t have anyone to talk to. I want to help the youth in Chicago any way I can because I was once in the same shoes. Thank you Audiomack and every artist that made this possible. Salute!” – Polo G

The 3 youth-based organizations were chosen as each serves a purpose in building up the youth of Chicago. Erika’s Lighthouse, who refers to their organization as a beacon of hope for adolescent depression, provides resources to cope with depression and suicide prevention. The independent Neighborhood Boys & Girls Club of Chicago provides a safe-haven and extracurricular programs for local youth. And the Chicago Grizzlies, which is Polo G’s independently funded AAU Team from his old north side neighborhood, is dedicated to developing local talent to compete at the regional level with resources to college scouts and scholarship opportunities.

Polo G, who rapidly rose to fame with his Top 10 Billboard Charting hit “Pop Out”, has made it a point to be involved in his community as much as possible between touring and recording. His NBA All-Star schedule included multiple NBA Cares events at local high schools and performances around the city all while promoting his newest single “Go Stupid” which released that Friday the 14th. With no plans of slowing down, the Columbia Records artist is set to release his anticipated sophomore album in the following months to come.

WHATS THE BUZZ ( MUSIC YOU SHOULD LISTEN TO WEEK 2.23.20 )
THE WORD | Did Chicago Police Shoot A Man, Because They Couldn’t Restrain him?