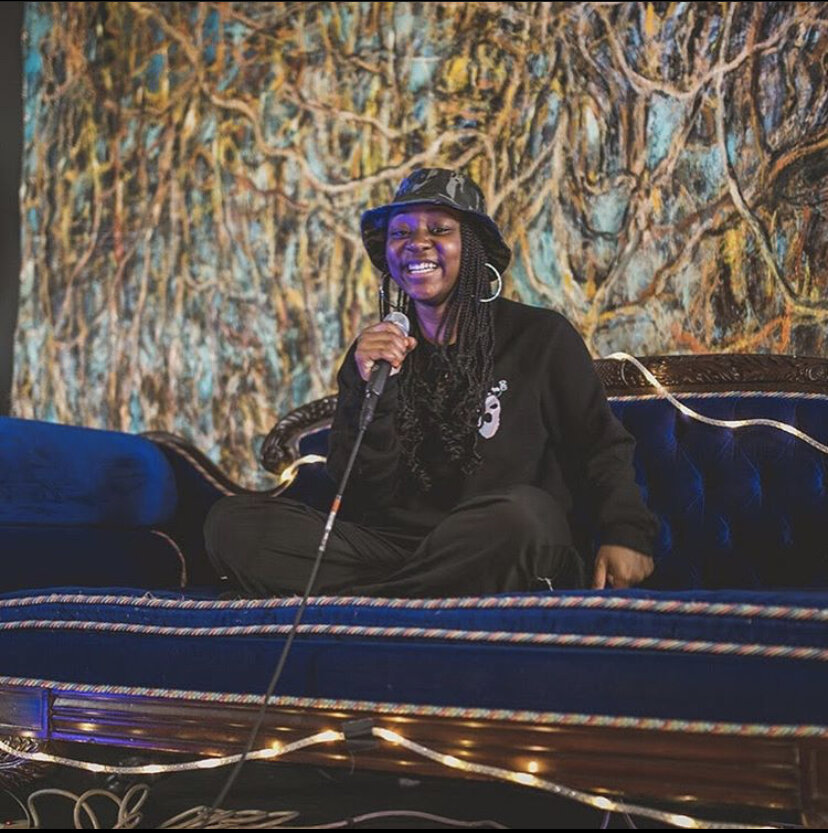 Decked out in a 80’s style bucket hat, box braids hanging from her scalp and big hoop earrings, Carter sported the round-the-way girl look that is an embodiment of her music. She’s from where we are, she’s relatable, but she can break things down in a way that’s unique—that’s what makes Brittney, Brittney.

Last night was truly a collaborative effort. I am so grateful for the people I have around me. Thank you to the entire @looptheory_inc fam. Y’all show up and support like no one else ever has. I love y’all. Thank you to @jagermeisterusa for sponsoring!! Y’all are the truth. And thank you to @connectgallery_ for allowing and offering your space to us. Thank you to everyone who came out to support. AS I AM OUT NOW! 📸: @kayodidthat_

Manning her own merch table, Carter gave away free t-shirts to attendees. Stickers and physical copies of her album AS I AM could be purchased at the table as Brittney displayed her Cash App to take payments.

Carter sat front and center on a sofa that resembled something from a palace, introducing her 9-track debut project to the intimate crowd. The album is almost exclusively produced by Scud One with interludes by Power 92’s HotRod. Carter’s DJ, Sensei blasted her tracks while fans bobbed their heads under the fluorescent lights.

In between songs Carter explained her mindset behind creating certain songs. She’s been in the process of creating the album since 2018, and she started writing one of her hooks after seeing Creed II are some notes she shared with the crowd.

“Cold As Us” is the lead single off of As I AM  which features Olive Blu. Blu also has a solo track on the album that makes love to your ears. Recording was the hardest thing about making the album, says Carter, as she wasn’t used to recording and had become accustomed to performing live at open mics.

Carter gained much popularity releasing freestyle videos on social media, and she’s since been releasing singles for the public’s enjoyment. One of her viral videos was recently retweeted by the legendary Missy Elliot, with cosigns from Rhapsody and TDE’s Reason; there are many eyes on this debut from her.

It was special to see her share her art with Chicago first, before releasing it to the world.

The album is available to stream on all platforms.

WHATS THE BUZZ | MUSIC YOU SHOULD LISTEN TO WEEK 10.25.20
‘By Chicago. For Chicago’: CITY OF CHICAGO ANNOUNCE PRO-BONO PLEDGE FOR A STRONGER CHICAGO