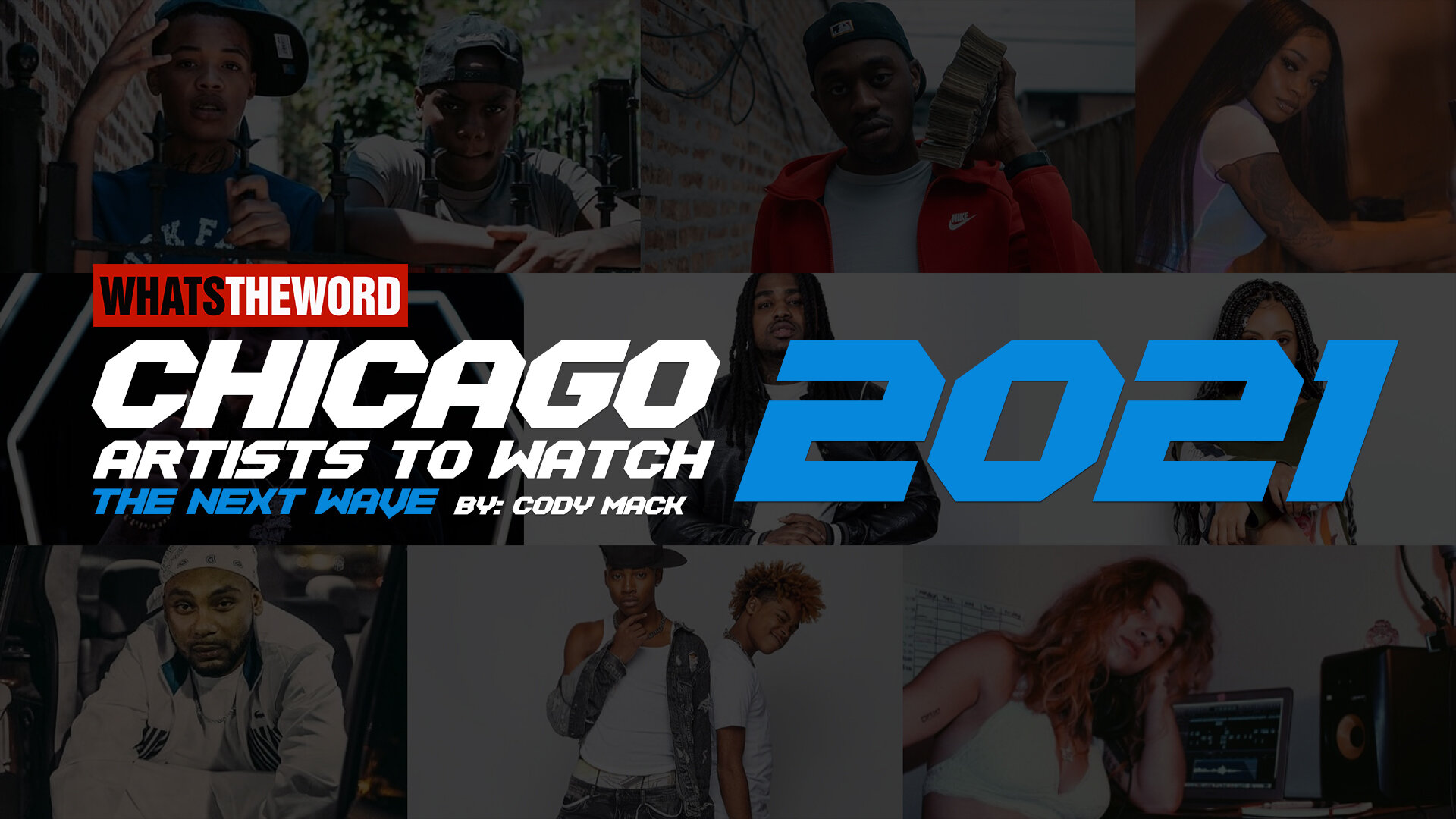 It’s that time of year again, you know that time when we drop our “list” of the Chicago artists to watch for the upcoming year. The list that gets everyone talking, the list that has helped many of Chicago’s talent get notoriety from prominent executives, labels, and national platforms. Names such as Juice WRLD, Calboy, Lil Zay Osama, Polo G, Tobi Lou, and more!

This year WHATS THE WORD wanted to get the fans involved. Each year we get feedback saying that we didn’t get it right; well, let’s see if the people have a better ear for talent than our staff and trusted industry consultants. We allowed everyone to vote for their favorite artists, and we must say it was helpful; because of the pandemic it’s been kind of hard to get out and see what new talent the city has to offer.

Considering there was over 80 artists, this was the hardest list to put together. There’s 5 artists that we left off that can easily be on this list. As the editor I even thought about extending the list to 30 names. After limitless consideration, this is what we were able to come up with. This was the hardest year, so we needed an extra month to listen to more music and consult with the culture.

“RIP to Trello, if he wasn’t murdered earlier this year he would of had a spot on this list. He was very talented I saw him making some noise in the rap industry.”

I really believe MVP Tino needs to be higher on this list, mainly because his unreleased records that I’ve heard are amazing. MVP Tino sound is very different from what is coming out of Chicago right now. I just hope he doesn’t pull a MVP NASA and not drop this year because it will be a waste of a spot.

DooWop is an interesting case. Just like MVP Tino, I’ve heard so much unreleased music from him, and it’s fire; he has to drop it and be consistent. He has all the co-signs, the team, and the talent.

Want to thank D1CMG CEO Mogul for putting me on this kid. He is very slept on, but he’a talented as hell. What I like most about him is his voice. I believe he is from the West-Side of Chicago, and if so this adds to the theory I got about 290 coming to take over the Chicago music scene.

Dre Izaya is a generational talent. BAM, the Music Director at Power 92.3 FM radio, sent me his music and said she was setting up an interview with him with Hotrod. During this time is when I got a promotion at the station. Therefore I wasn’t recording interviews as much. My role became more monitoring and serving as a “Digital Program Director” as Jay Alan would say (insider). This is an interview that I’m happy I filled in for the station interns. Dre Izaya’s music and energy were amazing. Dre Izaya has the total package; the only thing missing is more exposure.

I was first introduced to Sydny August during my early days as a “cameraman” at Power 92.3FM Radio (Chicago’s #1 Hip-Hop Station). I was filming an interview she did with rising radio personality Hotrod. Been a fan since and continued to follow her career. In 2020, she was co-signed by Lil Durk and OTF when she appeared on Durk’s album The Voice. No official press release has been sent out, but it’s clear that she is a member of OTF.

Had to check Jaas’s Chicago card at first, to see if she was from the crib ( lol ). If you’re from Chicago the golden rule is you can claim the city if you went to high school here. Jaas passed the test, and I’m happy she did because she has an amazing upside. Jaas is very talented and I believe she can be one of the next R&B artists to come out of the city.

Chris and Debo stand out because of their amazing Youtube following. Any music these two release gains traction from a massive YouTube audience they’ve grown. The massive YouTube following is a huge plus, but the music is good as well. With the combination of both, the only thing that is missing is that trending hit. Once they get that TikTok record (most of their audience is from that cloth ), these two are out of here. Joining other midwest artists such as DDG and Queen Naija, who Also blew up from Youtube.

My colleague Chelsea put me on Ca$hway. After listening to the first song, I knew this was special. It’s really his voice that stands out. His voice sets him apart from what we are hearing out of Chicago right now. I know he has a tape dropping in April; I hope it’s filled with bangers like his track What I Love.

OG Stevo is a talent that’s been buzzing for a few years. At first, I wasn’t as big on him; not because the music wasn’t good, but it was a sound that I’ve heard before. Don’t get me wrong, I loved his song Blue Cheese; it made our sleeper list. His recent record Don’t Scuff Em is a certified hit. This song is radio-ready, and with the right promotion and support, it could hit the charts. This is not the usual sound for OG Stevo, but this sound may take his career to that next step.

A very high-energy artist, Lil Ron, was left off the 2020 list. He was a shoo-in for 2021; pay attention to his music videos. He is talented and creative. With the right backing, Lil Ron will make some real noise.

BJRNCK is a star. No long paragraph is needed. She has the look, the voice, and the team. Once she rolls out those records, it’s over!

Not much to say about LIL Eazzyy except that he’s is “Onna Come Up.” Using the Internet, he landed himself a recorded deal without going through the “Chicago goal Keepers.”

I might get a lot of pushback about BigKayBeezy, mainly because many feel even though he spent most of his life in Chicago, but he’s not a true Chicagoan. The 19-year-old moved from Chicago his freshman year of high school to Texas but never disconnected from his Chicago roots.

It’s no question that the DCG Brothers are Number 1; they came out of nowhere in 2020. Since making their debut last year, the brothers haven’t taken their foot off the gas. Being backed by the legend Laka and his No More Heroes movement, I’m looking forward to the success they’re going to have.

2021 CHICAGO ARTISTS TO WATCH FAN VOTING
Baha Bank$ Flow is Like Water In New Video “DRIP” &amp; Chance The Rapper Says She’s Up Next Out of Chicago