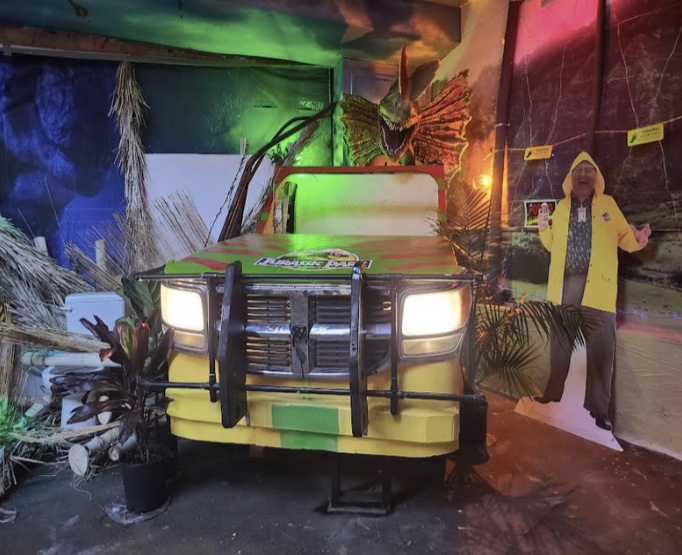 CHICAGO – A.J. Tarzian’s latest installation, “Jurassic”, presents a creative interpretation of the Jurassic World movie. Using melted Home Depot bags, Tarzian masterfully constructed a dinosaur from childhood memories of the film. Combined with the yellow Jurassic Park jeeps from the popular film that were designed to safely transport park visitors through the installation, Tarzian built a life-size dinosaur alongside famed villain, Dennis Nedry. Displayed at Chicago’s Replay Lincoln Park (2833 N. Sheffield Ave., Chicago, IL 60657), the “Jurassic” entire installation is comprised of a collective of different artist Pup.chi (pop-up chicago) along with AJ’s signature dinosaur piece. He wants his entire audience to contribute to the conversation by allowing themselves to be engulfed in a real-life Jurassic World.

He doesn’t stray from his technique of using found objects, combined with self-designed theatrical props, to showcase his design aesthetic. In connection to Plastic Bag Free Day taking place on Sunday July 3rd, A.J. prides himself on designing art that’s environmentally conscious. While his Jurassic park piece encompasses an array of plastic bags for the texture of the dinosaur, he thrives off of taking products that affect the environment and making it a beautiful installation.

Tarzian is responsible for some of the most well-known pop-up exhibits and set designs across the country. One in particular, Netflix’s hit show “Stranger Things,” Pop Up brought national attention to his work in major media sites such as Business Insider, Chicago Tribune, ESQUIRE and even Netflix themselves. Check out A.J. ‘s work below on his latest piece in True Star Magazine .