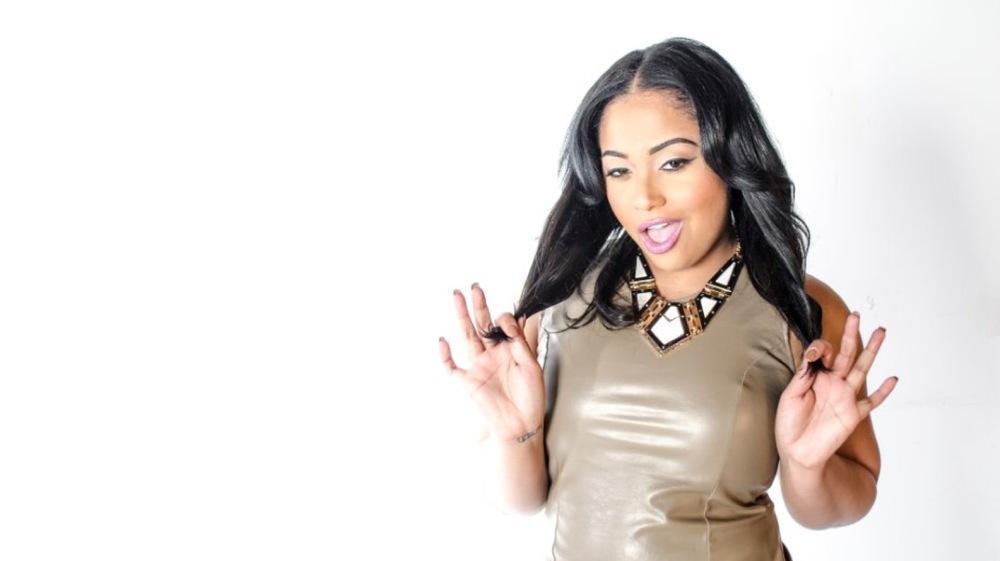 What’s your favorite radio station? It better be 107.5 WGCI because on-air personality Danielle D’Arceneaux (aka Dani D) brings the tea, inspiration, and hot topics that will give you life. Having a zest for speech, Dani D is no snooze when on the radio. Her sincere personality and conscious response places her in a league destined for success. However, never allow her cool demeanor and charming personality fool you, she takes her career very seriously. There is no short cuts or half stepping when it comes to prepping for her time on the air. She even admits that being a radio personality is more than just a career.

“Radio is my lifestyle, all day and night”, Dani D said.

Considering this radio lifestyle, it’s no surprise to learn that this 25-year-old has been involved with radio stations since college. During her undergraduate years at SIU, she crafted her on-air skills with a student-run radio operation called WIDB.net. Within three years she went from being the on-air personality with two co-hosts, to being the general manager of the station in her last year of college. Dani D wasted no time to show and prove her capabilities while maintaining her studies in broadcast journalism.

While still working at WIDB.net, she joined 101.5 CIL-FM street team in Carbondale, IL. She said, “A girl in one of my radio television classes was looking for street team interns, and I was like ‘hello’ [Laughs]. So I applied and was picked to join the street team.” This was a great achievement to obtain because for over 38 years 101.5 CIL-FM has been Southern Illinois #1 Hit music station. With her name now waving through both campus radio and within the city of Carbondale, Dani D still seek to achieve higher heights.

In 2012, she landed a marketing/promotion internship with WPWX Power 92 in Hammond, Ind. This urban contemporary radio station, which serves the Chicago area, opens the door of endless opportunities for her career.  Though the opportunity was great, she had a tough decision to make.

“One thing people don’t know about me was that CIL discussed giving me a part-time position during the time I was offered the internship with Power 92,” she said.

Granted, a part-time position with a radio station while in college is a great investment, but when you place it next to an internship with Power 92. Then it’s Game Over. In fact, Chicago rank No. 3 in the Top 50 media markets in the country.

During her last year in college (2013), Dani D kept in contact with Power 92 and was offered a producer position with a gospel station called The New Rejoice 102. This station essentially shared the same company as Power 92. As a producer, she gained a deeper appreciation toward the hustle and grind in delivering a dynamic show. “I grind hard and didn’t complain,” she replied, “I think that’s what people like about me.” Less than year in producing gospel music, she was approached by the program director of Power 92. He expressed that he would soon have her on the air.

Consequently however, she was given another producing position at Power 92. But she never complained or became discourage. Instead she took the producing position with the same integrity as before. “Everything, I think, was a test,” she said, “to see how hard I would go and how bad I really wanted it.” Notably, she succeeds and was given a 2-6 a.m. radio show she named After Hours With Dani D, every Saturday.

Impressively, she took advantage of being the station’s only on-air personality for Hip Hop and R&B. In efforts to engage the audience, she would ask her listeners to ‘check-in’. She expressed that people like to hear themselves on the radio. So she asked listeners to call the station and tell everyone, who was listening, about themselves. Alongside that, she created a “No Sleep Challenge”, which kept listeners tune-in to learn how to win her secret giveaways. This interaction was effective because she developed a level of friendship between herself and listeners.

“The people, who stayed up, were totally up for the challenge and didn’t hesitate to let me know by calling in or commenting on social media,” she said, “I was so thankful to have faithful listeners and supporters at that time of the morning.

[Laughs] Things got ‘ratchet’ while people were headed home from the club. But that’s what made the show great!”

Up until this point, Dani D was content with her vast wave of success with Power 92. Her career was definitely taking flight, which is rare to accomplish right after graduating college. She secured a daytime slot, which was from noon to 7 p.m. on Sundays. Those seven hours helped enhance her on-air skills, as well as, communicate to a larger audience. So you can only imagine her glee of surprise when she received a mystery phone call from WGCI-FM Chicago.

“It was the assistant programming director, and he was like I have an opportunity for you,” she said.

Though she wasn’t anticipating to leave Power 92 so soon, she gladly accepted this new opportunity to work with WGCI, owned by iHeartMedia Inc. Creditably, she always profess her gratitude to Power 92 and the influence it had on her career with WGCI.

“That seven hours is how WGCI heard me, so I’m thankful”, she said.

As of today, Dani D is still with WGCI. However, expect more moves from this ambitious young woman in the near future. Hopefully, reading her story inspires you to go out there and conquer your aspiration. Or take notes from her experience on how to achieve your dreams. In reading her story, you can see that Dani D has her eyes set on succeeding higher heights. Each opportunity she gains surpasses her last. Make a mental note of that and apply it to everything you do. In the meantime, make sure you tune-in to listen to Dani D on-air Saturday and Sunday from 10 a.m. to 2 p.m.  Better yet, check out her #Standoff episodes with co-host Trey White on WGCI.