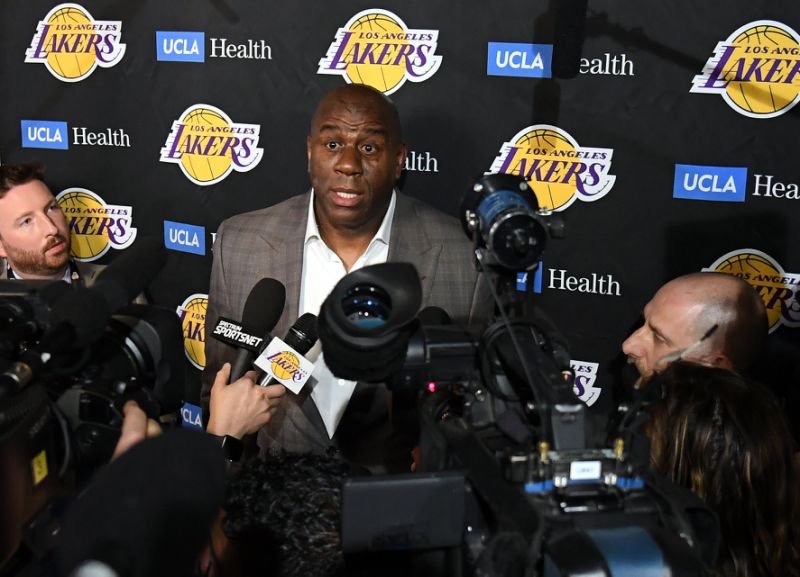 Magic Johnson shocks – well, everyone – and announces he’s stepping down as president of the Lakers. Says he’s not yet spoken to Jeanie Buss to tell her. Says he’s sick of tampering rules, he’s tired of the “backstabbing” & says he didn’t want to disappoint Jeanie by firing Luke. pic.twitter.com/m50VKQmmDR

Magic Johnson is stepping down from his position as president of basketball operations for the Los Angeles Lakers. Magic Johnson announced that he was leaving the Lakers ahead of the team’s final game of the season. He shared this announcement with the press before contacting team owner Jeanie Buss.

Shortly after news of Johnson stepping down broke, Jeanie Buss took to Twitter with a message.

“Earvin, I loved working side by side with you,” Buss wrote. “You’ve brought us a long way. We will continue the journey. We love you.”

Earvin, I loved working side by side with you. You’ve brought us a long way. We will continue the journey. We love you 💜💛 https://t.co/ofmQl6BtBz

Magic was hired by owner Jeanie Buss in February 2017 as part of a front-office restructuring in which her brother, head of basketball operations Jim Buss, and general manager Mitch Kupchak were deposed. Joining Johnson was General Manager Rob Pelinka, a former agent best known for representing Lakers legend Kobe Bryant.

While Magic took the unusual step of announcing his decision to the media before delivering it to Buss face-to-face, he referred to the Lakers owner as his “sister” and said he would continue to advise her and offer free agency pitches on behalf of the Lakers if she asked.

“There is no greater Los Angeles Laker than Earvin Johnson,” the franchise said in a statement. “We are deeply grateful to Magic for all that he has done for our franchise — as a player, an ambassador and an executive. He will always be not only a Lakers icon, but our family. As we begin the process of moving forward, we will work in a measured and methodical fashion to make the right moves for the future of our organization.”

Magic said his inability to speak freely about rival players was a contributing factor, calling himself a “free bird” who didn’t like being “handcuffed.” He drew the wrath of the league office, which fined him $500,000 for tampering with Paul George in 2017 and $50,000 for tampering with Giannis Antetokounmpo in 2018. The league also investigated contact with Philadelphia 76ers star Ben Simmons but ultimately ruled that Johnson had not violated its tampering rules.

“I love the NBA so much,” he said. “I’m looking forward to going back to being an ambassador. Now I don’t have to worry about [talking about players].”

Since making his NBA debut in 1979, Johnson has been affiliated with the Lakers as a player, coach and minority owner, in addition to his run as president.

While Magic denied this had anything to do with Lakers’ coach Luke Walton — who Magic had been given the green light to fire and was expected to do so in the next 24 hours.

Coach Luke Walton has been on the hot seat for months and was widely expected to be let go following the Lakers’ season finale. Reports indicated that Johnson had confronted Walton early in the season, but that their communication had cooled in recent weeks. Johnson expressed discomfort at the idea of firing Walton.