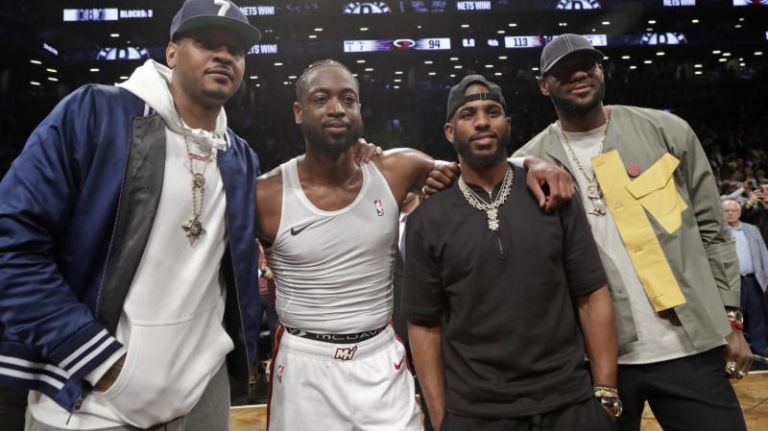 Dwyane Wade went out in legendary fashion. The Heat star recorded a triple-double during his final career game against the Nets on Wednesday night. Wade finished with 25 points (10/28 FG, 3/13 3PT), 10 assists and 11 rebounds.

“This is an Oscar-worthy script for my last game in my last season,” Wade said during a postgame interview.

Wade, who made his second start of the season, played a season-high 36 minutes. He did so in front of his friends and fellow NBA stars LeBron James, Chris Paul and Carmelo Anthony.

“Listen, we couldn’t miss D-Wade’s last game. This is the last time he’s going to be on an NBA floor wearing that Miami Heat uniform, that No. 3. So we’re happy to be here supporting him.” – LeBron James, LA LAKERS

James added: “He’s given so much to this game. [He’s] one of the best players we’ve ever seen in this game from as soon as he came out of Marquette. It’s an honor for me to be alongside him for four years and to also be his brother for the last 16 years of my career.”

What a career!! Congratulations my brother, the best is yet to come ✊🏾 #Brotherhood #BiggerThanBasketball #OneLastDance pic.twitter.com/XzGAag6XlU

Here's the incredible impact NBA star Dwyane Wade has had both on and off the court pic.twitter.com/zE78WJIwAN