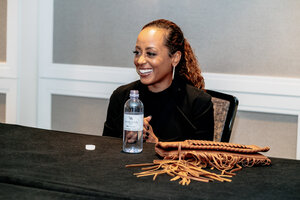 The longevity of actress Essence Atkins’ career is not by surprise. The hard-working, God-fearing mother of one has been in the business for three decades and has no plans of stopping. Her current role on OWN landed us in a room together where she discussed her role in Ambitions, being a mother, and is designed to live a life of Christ.

According to OWN, “Essence Atkins plays the role of Amara, a lawyer in the U.S. Attorney’s Office who has newly arrived in Atlanta with her husband, Titus (Kendrick Cross). Originally from Texas, she is quickly gaining attention from the U.S. Attorney’s Office as a diligent prosecutor.” Amara and husband Titus might have been together for twenty years, but Amara’s sorority sister, Stephanie Carlisle had him first. The role of Stephanie Carlisle is being played by none other than Robin Givens. The character Amara is unlike the roles we’ve seen Ms. Atkins play before, and she says the role is very different from who she is personally. When asked how she taps into Amara she stated

“ For me I’m always trying to tell the truth no matter what the imagery circumstances are, because I think that how audiences latch on to characters. I use a lot of my own personal pain, guilt or shame or whatever, it doesn’t always have to be linear. Emotions is emotions.”

Aside from acting, the thing Atkins loves doing the most is being a mother. In the press interview, she spoke of her son like mothers do when their child has won a spelling bee or the science fair. However, she’s just elated he is turning into a benevolent person and someone who notices the beauty of God.

First grade is nearly over but today Varro had his very 1st biographical (both written and verbal) presentation due. He chose to research and become Dr. King. During our discussions one of the most important things he was able to grasp was the distinction between something being legal (as segregation once was) and or something being right or just. There are new policies and laws being implemented that threaten this concept. Please make sure you exercise your Civic duty and vote your conscience in all elections. By voting we can help ensure that the lawmakers governing "we the people" adhere to humanity and legislate laws that dispense fairness applicable to all. #proudmama #excellence #grateful

During our interview, Ms. Atkins oozed perfection, love, and gratefulness. When I got the chance to ask how she got to this place of peace and happiness, she simply said it was because she was designed to be the person she is. Atkins spoke of her purpose and the love she gets from Jesus in a way that lifted the whole room. She left the reporters inspired to reach for a goal that wasn’t thought of yet, to understand that with God anything is possible, to be nice to everyone we come across and that the point of this world is to love.