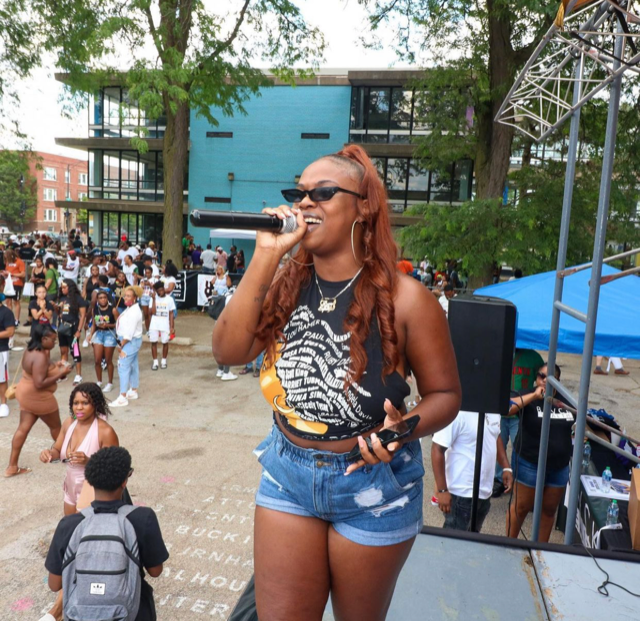 This past weekend was the first weekend for Juneteenth to be celebrated as a federal holiday. Venues in Chicago officially opened up on June 14th, which had the city bustling with various activities. The First Annual Juneteenth Block Party brought out a good portion of the city. The masterminds behind this event are well known in Chicago for their professional work as well as their work in the community.

Armani Banks, Cody Mack of WHATS THE WORD, and Theresa Ashford of Ashford Media created the event to celebrate Black Culture in ways that have never been done before. The Juneteenth Block Party took pride in everything being Black, the vendors, DJ’s and even landscapers were Black-owned.

A month before the event, WHATS THE WORD dropped the flyer for free vendors to be a part of the event. Hundreds applied and only 10 were selected. The closer it got to the day, the more hype was given about the event. More brands decided to look into this and wanted to be a part of giving back to the community; such as Power 92, Blvck Wealth, #ShutUpShei
, Bull Young Bourbon, True Star, and more.

On the day of the event, no one knew what to expect. Walking through the event we had two of Chicago’s well-known DJ’s, DJ Ca$hera and DJ D9-3 giving the crowd exactly what they needed. Vendors finished up their setup, giving a taste of the unique and varying businesses that were to be showcased at the block party. Vendors included Obi Roots, Xquiste Eats, Blaq Beard Club, Specific Scents, and more.

With Power 92’s personality Bree Specific being the host, it definitely gave the crowd something to come out to. The Bronzeville venue quickly filled up as cars pulled in and people started to walk up. The vibe of the crowd and the blasting of the music was heard down the street so you had no choice but to see what was going on. We had some greek lines stroll for us, people playing double dutch, and just vibing with each other giving off the Summertime Chi feel that we all needed since being quarantined for more than a year.

Although the Juneteenth Block Party was from 3-9pm, people were still out
celebrating until 1am. Some compared this to coming close to the celebration that goes on in Foster Park on the 4th of July. The fact that there was no violence during the event was a major talking point for those in attendance. The Juneteenth Block Party was one for the books.