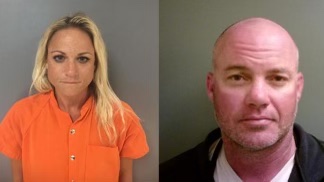 Cynthia Perkins, an ex-teacher who admitted to giving her Westside Junior High School students cupcakes injected with her ex-husband’s semen, has been sentenced to 41 years in prison.

Perkins, accepted a plea deal and pleaded guilty to second-degree rape, production of child pornography, and conspiracy of mingling harmful substances. Following her sentencing on Friday, she’s sentenced to 41 years in prison, 40 of those offer no possibility of parole.

68 out of 72 various sex crimes were dropped against Perkins after she agreed to testify against her ex-husband as part of the deal. Dennis Perkins, who is a former sheriff’s deputy, is facing 150 criminal charges those also including sex crimes.

In 2019, the couple ended up getting arrested after police found photographs of the them posing nude with a child, as well as other evidence while serving a search warrant in October of that year.

The current lawsuit against Dennis Perkins and the Livingston Parish School System alleges Cynthia Perkins videotaped Dennis supplying semen that was used to adulterate cupcakes that were later served to children. Court documents reported by WBRZ revealed that police also found pictures of Perkins’ students eating the semen-laced cupcakes and that the couple allegedly raped a child between the ages of 9 and 10. Investigators allegedly found hidden cameras in their attic and bathroom and said they uncovered more pictures on an iPhone.

Do you think this sentencing is enough? Let us know below!

VIDEO OF WOMAN’S DEATH IN CHICAGO POLICE CUSTODY IS RELEASED BY COPA
KANYE WEST RELEASED 4 SONGS OFF “DONDA 2”, WHICH IS ONLY AVAILABLE ON THE STEM PLAYER